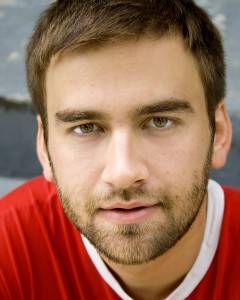 LH:  So, Dan Wilbur, anything rocking your world lately?

DW: Breaking Bad. It’s the common ground I have with all my friends. We fight about the suckiness of Mad Men and movies of all genres, but Breaking Bad seems to do it for everyone. It’s the Creedence Clearwater Revival of TV. We all agree. I’ve taken every Sunday off for the past 8 weeks to have comedians come over and drink and argue about what should happen next. It gets more intense than any of us would care to admit. I love that show.

LH: Wait, are only comedians allowed to come over and watch it? Do you have a secret knock?

DW: Yes! Comedians only. Usually it’s one or two guys and my girlfriend who show up, and they team up to tell me I’m wrong about plot lines. I swear I will be vindicated! When comedians come to my apartment, they don’t even have to knock since I can usually hear them sobbing outside before they get a chance to lift their sad, angry fist to the door. The point is, comedians only in my apartment. It’s constant laughter in my place. And by “laughter,” I mean “trash-talking other comedians.”

LH: What is it that you love about the show?

DW: I think I got hooked because of the way they dealt with the cancer. Walt’s hiding things from episode one, but in the early episodes they really make you feel for him, and feel excited when he wins (violent or nonviolent). It rarely is repetitive (aside from talking to his wife in certain scenes), and you can really see when Walt is dealing with something outrageous as a normal guy (like dealing with doctors and bill paying and awkward birthdays) erstwhile harboring huge secrets and toying with the idea of being a Scarface-like criminal. It feels like a novel rather than a typical show where you can depend on the characters to all remain “the same ole so-and-so.” They take their time with teasing out each step, and once Saul shows up (played by Bob Odenkirk), the whole thing becomes the suspenseful, funny pressure cooker everyone is hooked on. I like the turns and the suspense, but the focus on “what kind of Walt are we dealing with?” is what keeps me hooked.

LH: Are you aware you just used the word ‘hooked’ three times while describing a show about meth?

DW: Yes. I tried not to use “addictive” anywhere and then I forgot what I was doing. I also just gave you a long explanation of nearly any recent serialized drama by writing “it feels like a novel.” I was trying not to sound like a dumb fanboy but I failed. FAILED! All I was trying to say was I like the small moments on the show rather than just the action/suspense/hooks that keep you hooked.

LH: No one here is judging you, Dan. So how do you keep yourself entertained in the other 167 hours of the week that Breaking Bad isn’t on?

DW: You mean besides trying to be funny on Twitter?? Most of the time I’m not working at the bookstore, I’m out doing stand-up shows and coaxing other comics to give me their drink tickets. When it’s me-time at home, it’s a lot of Super Nintendo. That sounded like I was a Dad calling every gaming system a Nintendo, but I mean a REAL SNES! I’m currently playing Chrono Trigger for the first time, and I can’t believe I missed it as a kid. It’s a great RPG with funny meta-video game jokes (like after you pick up random food that heals a character, a common part of a gaming, you later are put on trial for stealing! That’s not how games are supposed to work! There aren’t supposed to be consequences in older games!). It was ahead of its time. The only other truly great/funny meta-game moments like that are in Super Paper Mario for Wii. Is this going too far into the wrong geek-realm? Should I be talking about books I read?

LH: There are no wrong answers here, Dan. This is like the Montessori school of interviews. Tell us more about doing stand-up shows. Are you nervous when you get up on stage?

DW: Ha! A judgment-free zone? But I’ve been living in NYC for so long I don’t know even know who I am if no one is there to scoff at me. I started doing stand-up the second I got to Bard College in 2005, but I started doing improv and theater seriously around age 12. Nerves never leave completely, but I’ve never been scared to get onstage.

That said, while hosting shows, I’ve become very aware of when a new bit is not doing well, and instead of getting flustered I will start digging deeper into unwritten material and engaging with audience members about the subject I’m now rambling about and eventually find something funny in that moment. That requires remaining completely confident on the outside (so the audience doesn’t lose trust) while the wheels start turning in your brain to find what’s funny about this subject/moment. If you’re in front of a packed room and you only get a ten minute spot, you don’t want more than thirty seconds- ah! Maybe ten seconds- to go by without a laugh. But sometimes as a host you have to dig people out of their bad moods, make them comfortable with listening to comedy. Often that requires engaging weirdos and talking about what’s on your mind instead of doing straight bits.

Hosting can either feel like being an aggressive school teacher or a yoga instructor trying to feel the vibe of a room. Both are scary. But just doing spots on other people’s shows? Last night I did 12 minutes in front of 100 people and was nervous for about the first ten seconds, until my first joke was out and getting a response. The rest of the time onstage was fun.

DW: No. I’m never nervous because I’m good at it!

LH: Proud of you.

Dan is a comedian, writer, and avid video game player living in Brooklyn, NY. If you like Dan, even a little, it’s probably because you’ve seen his writing or you’re his parents. His writing is featured on Collegehumor.com, McSweeney’s, The Huffington Post and the Onion News Network. Dan is the creator and editor of Better Book Titles. His first humor book “How Not to Read: Harnessing the Power of a Literature-Free Life” is out now! (Photo credit: Anya Garrett)