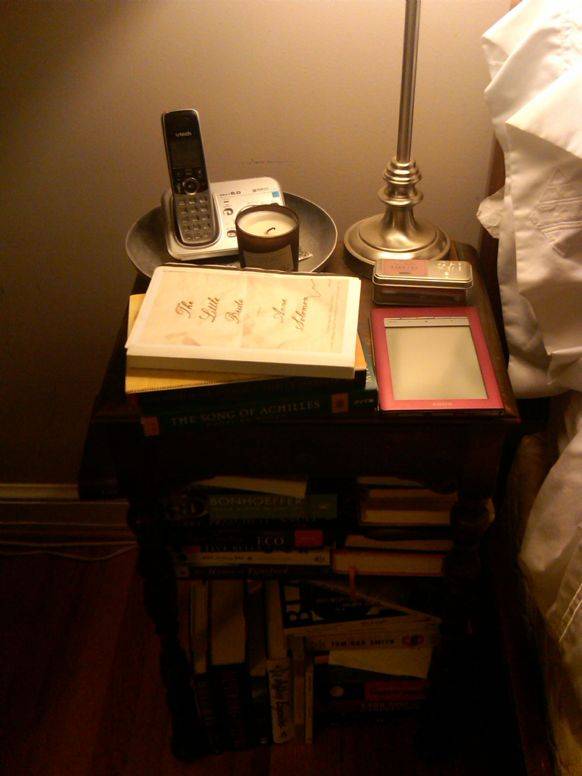 I’ve been on vacation, which means many things: sun, sand, lobster–and forgetting, every year, that Massachusetts has “packies” in place of DC metro-area wine and beer in grocery stores. It also means that I drag out my supersized boat-and-tote bag and fill it with books that I hope to read during vacation.

The operative word, of course, is “hope.” Even at my unusually fast (some say “freakish”) reading pace, there are only so many pages that can be turned in the so many hours we have in a day. Out of the thirty-odd books I stuff into my tote, I read (SOB) just 10. I’m going to list those here, and give a brief explanation of how each one got chosen to “survive.” Once I’d tallied up and looked at all of the books, I realized there were subtle “alliances” formed by my brain that actually affected how I decided which to read. Of course, those “alliances” may have been affected by the sun–maybe even by a Cape Codder or three…

1. The Soldier’s Wife by Joanna Trollope: I’d been wanting to read Trollope’s most recent “Aga saga” for some time, especially as I know its military-spouse world well. This led me to start…

2. The After Wife by Gigi Levangie Grazer: I’ve interviewed and met the incredibly smart @GigiLevangie several times, so I knew her latest novel would be the perfect start to Official Vacation Day One. Then I chose…

3. The Girl Giant by Kristin den Hartog: What was the connection? The Grazer had slim gams ending in platform-sandal-clad tootsies. The den Hartog cover? Giantess calves in enormous brown brogues. Intriguing!

4. Pure by Andrew Miller: From brown lace-ups to silver-buckled slip ons…Miller’s quietly affecting tale of a young civil engineer tasked with emptying a pre-Revolution Parisian cemetery had shoes on the cover, too.

5. Telegraph Avenue by Michael Chabon: Miller’s was a most European book, which made me crave something American, much like yearning for a plain hot dog after binging on coq au vin.

6. NW by Zadie Smith: However, my innate preference for the view from across the pond took over as I gazed that way from Chatham, finally using my e-reader for the first time on this trip.

7. Abdication by Juliet Nicholson: Smith’s London made my fingers twitch for more Britishisms, so I plucked this historical tale of England in the 1930s from my tote bag.

8. The Innocents by Francesca Segal: It takes me a while to tire of London (good thing too, as Dr. Johnson might remind us), and lo and behold: Segal’s take on The Age of Innocence is set in…NW London.

9. Flight Behavior by Barbara Kingsolver: The female figure on Segal’s cover is seen from behind, running…and sporting a gown trimmed with feathers. No wonder I chose this ARC!

10. May We Be Forgiven by A.M. Homes: Finally, on the home stretch, I made a choice that had more to do with what was between the covers. Kingsolver’s novel was elegant and traditional; I wanted my next read to be elegant and edgy.

So what have you been reading, on vacation, or not? I’m looking forward to catching up on your responses this week!