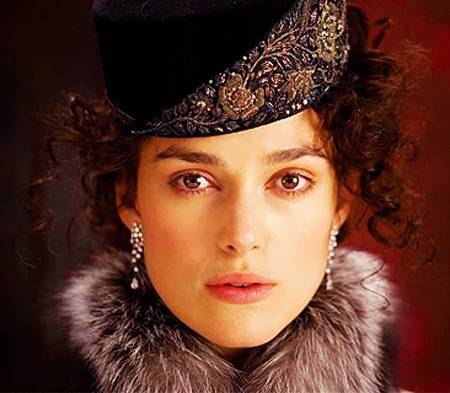 Editor’s note: If you want to watch the trailer before Kit breaks it down for you, check it out here.

:01- We start with a Tolstoy quote about love…which is so pretentious…which is good because PRETENTIOUS IS MY FAVORITE.

:20 -Orchestra plays in pit as curtains come up on stage and all the characters that are going to be important in this movie are posed in manners most tragic and we cut to a shot of Keira Knightley, looking miserable even though she’s wearing so many great necklaces, reminding us that she will be in EVERY PERIOD MOVIE FROM NOW UNTIL FOREVER.

:33- This is the part of the trailer where everyone tells Anna Karenina how great her husband Karenin is, but we get lots of shots of him wearing pedophile glasses and never smiling, so we know everyone is lying.

Also, how did Jude Law sign on NOT to play Vronsky? I think he wanted to prove he could still be hot playing a gross character. This did not happen. Your Powers of Hot only go so far, my friend. (I’m pretending Jude Law is my friend.)

:40- We get fancy font title cards about this being the twilight of an empire (I’m not in sophomore AP World History, I don’t care) and an affair shocking a nation (we’re forty seconds in and I haven’t gotten a single shot of Aaron-Johnson-as-Vronsky in a cavalry officer uniform yet, get it together, People Who Make Trailers, how long do you think my attention span is?).

:49- Now Johnson and Keira Knightley do the silliest slow motion social dancing ever. I’m not hyperbolizing. Ever. Just watch. This is how I’m going to dance at my wedding. And everybody else’s wedding I ever go to. And just any time a song is playing for the rest of my life.

1:04- Fancy font title cards tell me this is going to be a bold new vision. Okay, but you got to top flapper skanks bumping it to Jay-Z and Kanye in the Gatsby trailer. That was a bold new vision. Bold because now 500,000 English majors have a hit out on Baz Luhrman.

1:15- Vronsky and Karenina finally have hot sex. A MINUTE AND FIFTEEN SECONDS TOO LATE IF YOU ASK ME.

1:19- Knightley finally wears the classic Anna Karenina Huge Muff Ball Thing Of Russian Animal Fur. You know, the hat. A MINUTE AND NINETEEN SECONDS TOO LATE IF YOU ASK ME.

1:27- We get more voice-over of Karenina’s husband being obsequious and boring. Karenin, you are lucky that all Knightley is doing is Anna-Karenina-ing you. If I were your wife during the twilight of an empire, and you were being annoying about me having an affair that shocked the nation, it would be bye-bye Crime and Punishment-style for you, mon amie.

1:43- Everyone’s upset about Anna, and we get a lot of quick shots of disapproval, and I think I’m supposed to… care? Yes, I’m almost positive I’m supposed to care. But, like, I don’t know, it’s hard with Aaron Johnson’s mustache, that’s making it really hard for me to be invested in this romance. I never said I was deep/a good person.

1:55- Knightley wears a lot of veils and fans herself a bunch, and right now I care more about both these accessories than the story.

2:00- This is the part in the trailer where you get lots of quick shots of things like horse-racing and ballroom dancing and cannons going off and Keira Knightley holding a knife to her face  to convince you that this is an exciting movie. You will not so easily sway me, trailer. I have courage in my convictions!

2:20- Keira Knightley and Aaron Johnson have a really vague and boring voice over conversation about love. I really think two and a half minutes of quick shots of them having hot sex while Keira wore The Fur Hat that little Russian squirrels tell their children about to make them mind their manners would have been a way better sell for this movie. I missed my calling to be a trailer director just like I missed my calling to be an astronaut with superpowers.

2:28- Fancy font title cards tell me Tom Stoppard wrote the screenplay. (Zombie Voice) This is going to be a great movie. Disregard all aforementioned snark.The droids I was looking for are not in this trailer.