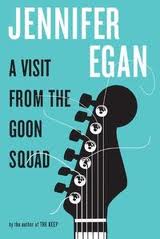 In the past, this project has usually run aground sometime around June 22, partially because I’m a flaky flibbertigibbet, and partially because you can only read so many rockstar memoirs without wanting to die. One summer I read Jen Trynin and Jake Slichter’s books back-to-back, and I was pretty sure I could write a thesis on recoupable debt.

Here are a few of my favorites thus far:

The House of Tomorrow by Peter Bognanni: Sixteen-year-old Sebastian Pendergrast is a home-schooled kid who lives in a geodesic dome with his Buckminster R. Fuller-loving grandma. When Grandma gets a little goofy, Sebastian is cast out into the world and lands at the home of the Whitcombs, where he discovers all the things he’s been missing: friendship, Pop Tarts, and The Ramones. This one wins because Sebastian’s voice is so charming and the author never drops it.

Juliet, Naked by Nick Hornby: Yeah, I’ve read High Fidelity. It’s the first book everyone suggests when you ask about rock & roll novels, but you know what? I like Internet-fansite web nerds more than snooty record store clerks. Also Tucker Crowe, the main character in Juliet, Naked, reminds me of Paul Westerberg.

A Visit from the Goon Squad by Jennifer Egan: Every accolade and prize this novel of linked short stories won is deserved. Probably my favorite book of the past five or so years. The stories spin around record executive Bennie Salazar and his assistant Sasha and the other people in their orbit. There’s not as much music as I’d like, but the writing is so brilliant you can’t help put out it on every list you ever make.

The Song is You by Arthur Phillips: So often the rock & roll books are about teenagers, which isn’t necessarily a bad thing, but let’s face it, being a teen rock & roll fan and being a grown-up rock & roll fan are two very different things. This what makes Phillips’ novel about commercial-director Julian and his obsession with about-to-hit-it-big singer Cait so great–it’s about grownups. Julian’s an adult and he’s dealing with grownup shit, which is refreshing. And he deals with it through music by trying to understand the music, and what makes it so difficult is that he tries to understand Cait through the music, and that just can’t be done. How a person relates to music is one of the most intensely unique and personal relationships we ever have, and Julian has to figure that out the hard way.

Those are some of my favorites. I’d probably add Nick & Norah’s Infinite Playlist, Out of the Vinyl Deeps, and Kristen Hersh’s memoir Rat Girl to this list, but I’ve yammered on long enough and I want to know if you have any favorite rock & roll books (fiction or non-fiction).

Right now I’m in the midst of The Ground Beneath Her Feet by Salman Rushdie with Great Jones Street by Don DeLillo and Stone Arabia by Dana Spiotta on deck.