Reading Technologies is a series about developments in digital reading and related technologies. Over several weeks, we’ll have guest posts from a variety of people on the cutting edge of e-reading, interactive media, and digital publishing.

This installment is by Richard Nash. Richard is the VP of content and community at Small Demons, which allows you to see all the details–the people, places, and things—that make up your favorite books and discover new books by connecting those details.

Here’s what algorithms can’t do: tell you what to read. Why? Because vast server farms are crunching three-minute songs, and they can barely figure out overlapping taste—faced with a text that takes ten hours to read, they cower. Netflix has thrown enormous resources at the same issue, but it can’t figure out why some people love and some people hate Napoleon Dynamite.

Here’s what algorithms can do: allow you to re-see all the books you’ve read and rediscover detail after detail of their beauty and intensity. That’s what we’re doing at Small Demons.

This all started because our founder, Valla Vakili, was reading Jean-Claude Izzo’s Total Chaos, and he couldn’t help himself from downloading the jazz the protagonist listened to, buying the Laguvulin (not cheap!) the protagonist drank, and flying to Marseille to immerse himself in the world of the book. His gut told him that extreme as this might seem, it’s not unusual, not unusual at all.

Last month, someone posted on our feedback forum that we should get White Oleander indexed. “When we were in high school,” says she,  “my best friend and I stuck tester strips of the perfumes the different female characters wear into the relevant pages in our books.”

Now, we all know, like with any old relationship, you never quite get that feeling back, but the beauty of the book (and of any old but great relationship) is that each time you re-read, you see new things both because you’re now a different person and because the book itself changed you. But now, on top of all your own personal associations—to the pier you imagined your own windswept self walking down, the Smiths’ songs that instantly watered your eyes (OK, mine), to the maelstrom of obscure Australian historical incidents in Peter Carey’s Illywhacker (yeah, also me)—you get to see how all those references connect to the wider, wilder world.

So, let’s say “Little Red Corvette.” You’re scrolling through Murakami’s Kafka on the Shore. You haven’t actually read it, but everyone was talking about 1Q84 last year and you’re feeling guilty. So you scroll through, and you see “Little Red Corvette” and you remember buying that album on cassette tape, and so you click on it, and it takes you to a page where you see it’s mentioned also in Nick Hornby’s High Fidelity. And you favorite all three (that feature to come 😉 ). But you end up buying High Fidelity because it mentions Katrina and the Waves’ “Walkin on Sunshine,” a song that just made you inexplicably happy whenever you heard it. 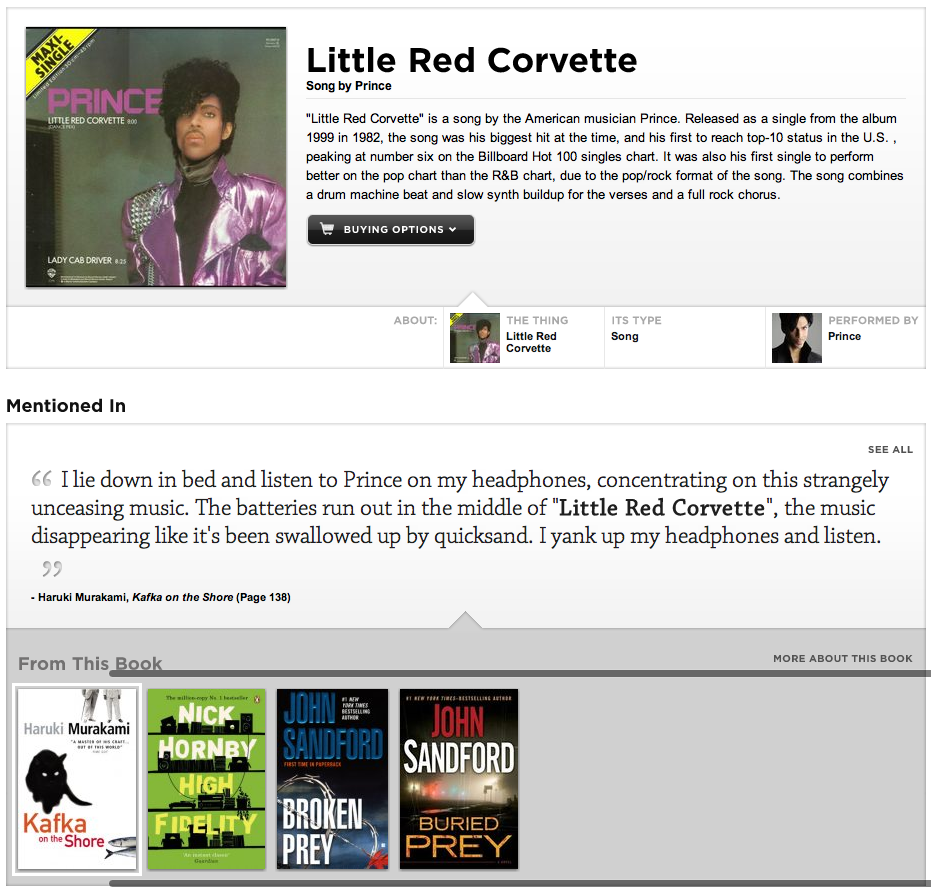 You keep going, click on Doc Martens because why not and holy shit, Doc Martens are in a lot of books. Jennifer Egan and Jennifer Weiner. Poppy Z. Brite and Annie Proulx. William Gibson? So they have Doc Martens in the future! (Later you learn the recent Gibson novels are set in some not-so-altered version of the present.) Several crime novelists you recognize. But what the hell is The Education of Arnold Hitler? 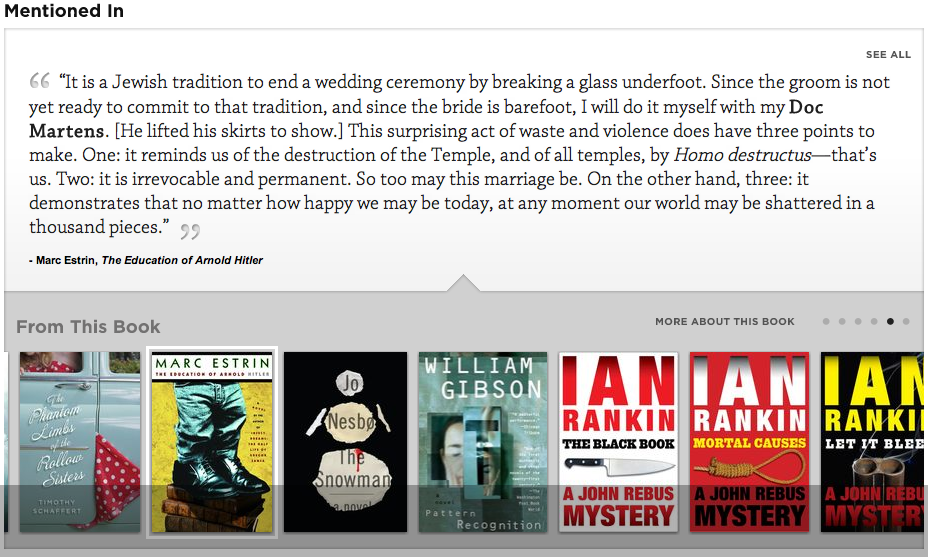 Damn, that’s rather strange and lovely. Now you’re getting that, too.

Then you go check out Infinite Jest, sorta like one has to at least stand beneath the Empire State Building and look up.

What’s amazing there isn’t all the TV references, it’s the Everything Else references–the nineteen periodicals, the huge paragraph incorporating Virginia Slims. You end up adding Johnny Mathis’s “Chances Are” to a Spotify playlist (this feature also to come) because surely it must mean something.

You get my drift right? This is the New Serendipity. (It doesn’t kill the old one, by the way.) No-one is telling you what to read, but you are navigating a universe using writers as your guides—neurotic, self-effacing, pompous as they may be, you want to share in their curiosity, dive into their miscellany, find your own path.