Unless you’re living under a pop-culture rock, you’re aware that the fairy tales are having a moment. On television, ABC’s fantasy-soap Once Upon a Time and NBC’s fantasy-procedural Grimm both rely on the as-of-this-year 200-year-old collection of Brothers Grimm fairy tales. Last year, in theaters we had the dark re-imagining of Little Red Riding Hood , we have Jack the Giant Killer coming out this summer and Hansel and Gretel: Witch Hunters next year. Beauty and the Beast is currently racking up adaptations with last year’s modern-day take feature Beastly and pilots ordered by ABC and the CW based on the classic fairytale. However, the princess of this particular moment is almost certainly Snow White.

Snow White (played by Ginnifer Goodwin) commands one of the central roles in ABC’s Once Upon a Time. She also stars in two major film adaptations over of the course of this year. There’s this month’s obviously-trying-to-be-The-Princess-Bride Mirror Mirror, starring Lily Collins as Snow White and Julia Roberts as the Evil Queen. Then there’s this summer’s obviously-trying-to-be-the-Lord-of-the-Rings-trilogy Snow White and the Huntsman, starring Bella Swan, sorry, Kristen Stewart as Snow White and Thor, sorry, Chris Hemsworth as the Huntsman. Watch the trailers. The two have polar opposite takes on the fairytale. The trailer of Mirror Mirror basically opens with a fairy tale Bollywood sequence. In the  Snow White and the Huntsman trailer, the Evil Queen (Charlize Theron) sucks the youth out of young girls and things are constantly exploding into glass shards and ravens. 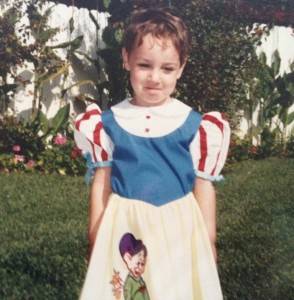 Which has me wondering, is Snow White a badass? Is this just our modern girls-need-to-be-both-sexypants-AND-kick-butt spin on things? Or was Snow White always a force to be reckoned with?

I pulled out my childhood copy of The Complete Brothers Grimm Fairy Tales, which probably hadn’t been cracked since I was eight, and took a look.  There was plenty of the 1937 Disney animated film plot points. We remember those and don’t need to revisit them here.

And it turned out, there are a few details that I didn’t remember.

First, in the Grimm’s version, the Evil Queen isn’t Snow White’s stepmother. It’s her mother. It’s one thing to have your stepmother hate you, it’s quite another to have your pushed-you-out-of-her-birth-canal-and-into-the-world flesh and blood MOTHER sentence you to death basically just for being pretty. We’ll give Snow White a hardcore point or two for that.

Fast-forwarding a little bit, unlike the Disney cartoon, it takes the Evil Queen magic-number-three tries to axe Snow White. She pretends to be an old woman selling bodices and sews Snow White up so tight she “…could not breathe and she fell down as if she were dead.” The dwarves come home, unlace her, bring her back to life, and the Evil Queen tries again a day later with a poison comb, same deal, Snow White coma’s out, dwarves remove the comb from her hair and our girl is cool again. The poison apple bit plays out pretty much the same.

So it takes the Evil Queen THREE times to kill Snow White and she never ends up succeeding? You guys, if an Evil Queen were trying to kill me, she would probably have to try, like, once. That would be enough. Yes, Snow White gets help from The Huntsman, dwarves, and Prince Awesome. But you know what? Harry Potter got SO much help from Hermione, Dumbledore, and all the adults in the Order of the Phoenix. That didn’t stop him from being The Boy Who Lived and I don’t think the help Snow White receives diminishes her status as The Girl Who Lived.

Snow White is an ass-kicker in her new incarnations, but girl was always a survivor, and that’s to be respected and commended.

As a last note, when Snow White and the Prince get married, the Evil Queen can’t resist crashing the wedding. The last lines of the fairy tale read “… then they put a pair of iron shoes in the fire until they glowed and she had to put them on and dance in them. Her feet were terribly burned, and she could not stop dancing until she had danced herself to death.”

Yikes on bikes. Looks like Snow White had a little bit of Evil Queen in her all along.