When I was eleven I was a proto sci-fi/fantasy book nerd. I didn’t know from genre, but I knew I liked elves and unicorns and quests that involved chalices and knowing older women, queens, who wore tiaras that I could look up to as models for my burgeoning womanhood. I would rule some elves and a land full of medieval pastureland that pastured fire-breathing dragons, but justly, righteously. 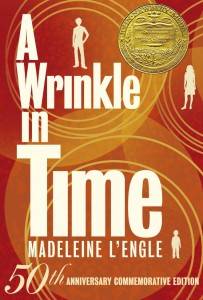 So when I received Madeleine L’Engle’s A Wrinkle In Time and met the main character: mousy, fearful, big-boned, big-hearted and unexpectedly brave Meg I was just flabbergasted. No elves. No chalices. No whiffs of serfs, and a medieval setting. It was set on a farm, in the present day, early urban sci-fi and fantasy before that was a section of the bookstore; I wonder if Neil Gaiman has read L’Engle. Anyway, tween girls should.

As a tween girl girl reading A Wrinkle In Time, here I was in fiction. Or, here I was as I thought of myself. I so wanted my stay-at-home Mom to make us stew on a Bunsen burner, like Meg’s mother did. I looked up to Meg’s mother, Mrs. Murray, as a modern version of a sci-fi and fantasy queen, a gorgeous, red-haired research scientist who raised four children while her husband was away, abducted, in fact, on a business trip.

The book is a series of adventures Meg takes to other planets to find her father and to rescue her younger brother Charles Wallace, a savant, and ultimately to save the world. She has help in the form of three old ladies, witches (or tramps, angels, or stars, depending on how they portray themselves): Mrs. Which, Mrs. Whatsit, and Mrs. Who.

This is like Greek myth here. Joseph Campbell stuff. One of the gifts Meg receives from the witches is “her faults.” How great is this? The Hero With A Thousand Faces has the face in this case…of an awkward tween girl who is good at math. Oh people! Oh happy, feminist day, 1962, when A Wrinkle In Time was published.

My favorite character, perhaps in all of literature, is in A Wrinkle in Time. Aunt Beast. Aunt Beast, a tentacled, furry octopus of a thing who resuscitates Meg after her particularly greuling interplanetary travel-rescue mission. Aunt Beast communicates via thoughts so you don’t have to confuse the relationship with talk, understands, calms you with her sweet-scented fur, and feeds you delicious, soul-reviving morsels of whatever constitutes food on her nurse planet. I’m in an infant milk-drunk swoon, nestling next to her, even as she is words on a page: she is alive in my imagination.

Sign up for What's Up In YA? to receive all things young adult literature.
Thank you for signing up! Keep an eye on your inbox.
By signing up you agree to our Terms of Service
#Our Reading Lives#Young Adult Literature