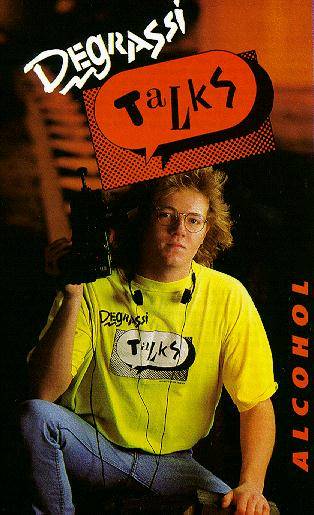 Neil Hope played Wheels on the original Degrassi Junior High and High series. He was a pretty important figure of my life growing up, as was the whole Degrassi cast. And he died, as I say, about five years ago.

Nobody knew, it seems, until this week.  Not some members of his family, not his former costars, and not the fans who grew up with him.

Neil Hope, by all accounts, had a pretty tragic life. When I read about his death, I was immediately transported back in time to the library of Kemptville Public School, where I first learned about part of the tragedy of Neil Hope’s life in a little book called Degrassi Talks: Alcohol.

Those Degrassi Talks books were pretty amazing things. They were partnered with a television series with the same title (which I think I only ever saw in health classes) where the cast of Degrassi would talk about serious issues involving teenagers. They were important books not just because they could stand in for difficult conversations parents didn’t want to have with their kids, but more importantly they predicted the questions before I even knew what my questions were. I remember so clearly the copy of Degrassi Talks: Sex because it was comically, hilariously dog-eared and spine-cracked, but according to the card in the pocket it had never been checked out once. These books existed in the library to be surreptitiously consulted (and occasionally giggled over) as needed.

They usually paired the actors with issues their characters had dealt with, but Neil Hope’s issue was different. Because when he talked about alcoholism, he talked about it from not only the experiences of his character but those from his own life as well. Wheels the character had lost his parents to an accident caused by a drunk driver, but Neil Hope the teenager had been raised by alcoholic parents and had lost his father to the disease. And in the pages of Degrassi Talks: Alcohol, his story illuminates so many feelings experienced by children of alcoholics: guilt, resentment, confusion, and fear.

I read all the Degrassi Talks books, each one more than once, but Degrassi Talks: Alcohol and Neil Hope’s plight are etched on a special level of my consciousness. That’s because one day, when I toddled off to the library to hide out over a lunchtime recess, I found a classmate hunched over a copy of Degrassi Talks: Alcohol, and she was crying. She was crying because reading that book gave her an understanding of the vocabulary her mother used to describe her father’s actions. She was crying because she had just figured out that her father was an alcoholic.

Category ID: 477
Category ID: 468
What’s Up in YA? Newsletter
Sign up for What's Up In YA? to receive all things young adult literature.
Thank you for signing up! Keep an eye on your inbox.
By signing up you agree to our terms of use

This wasn’t a scene from The Breakfast Club and we didn’t immediately become best friends.  She was very popular; I was very not popular. We sat together through that lunchtime recess and then, as near as I can remember, never again. But in that moment I learned a lesson about books for children that I have held with me for the rest of my life: childhood is not easy, and books sometimes make it a little easier to bear. I also, in that moment, learned something I have continued to relearn with every book I read: stories give us the gift of empathy and allow us to walk, sometimes blissfully briefly, in someone else’s shoes.

When I heard of Neil Hope’s death, I was immediately transported to that public school library where I learned the two lessons that have shaped so many of my life experiences.

Godspeed, Wheels.  I hope your slim little volume on alcohol, and all the other Degrassi Talks books, are still tucked on library shelves: the place where tough books for young people quietly do the most good.