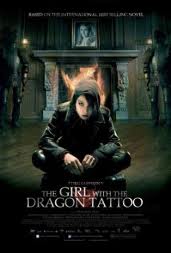 Have you seen David Fincher’s The Girl With The Dragon Tattoo yet?  (If not, and if you haven’t read the books, this intro contains a spoiler or two — you may want to skip it.)

I caught it this past weekend, and thought it was pretty solid. But one thing about the film really, really bugged me: Swedish actor Stellan Skarsgard playing Martin Vanger, which seems like a horrible, awful miscast. Here’s why: Most people will recognize Skarsgard as the conceited math professor in Good Will Hunting, so I kept waiting for him to unleash a line like “Oh, it’s about my medal? You can have it.” But beyond that, he just seems too debonair and well-formed to play such an evil character. I never bought it — especially in the scene at the end. Part of the point, I’ll grant, is the deception (that a respected CEO could be so evil) — but in that last scene, I was more willing to believe there’d be a discussion about Swedish literature than a potential dismemberment.

And so this got me thinking about some other literary characters who were horribly miscast in film adaptations. Here’s a top 5:

as Antonio Corelli in Captain Corelli’s Mandolin — Maybe it’s just me, but whenever Nic Cage appears on screen in any role, I can’t help but giggle. He’s just so silly. But his turn as a dreamy Italian guy made me laugh especially hard. Whoa.

4. Dylan Walsh as Sully’s son in Nobody’s Fool — This Walsh fella (who you’ve probably never heard of) can’t act his way out of a paper bag. This selection might be a bit of a deep cut, but if you haven’t seen Nobody’s Fool (based on the Richard Russo novel and starring Paul Newman), check it out — it’s is a vastly underrated movie. Peter Sullivan has so much potential as a character for a good actor, so the fact that Walsh couldn’t deliver has always bothered me.

3. Brad Pitt as Louis de Pointe du Lac in Interview with the Vampire — In an interview with Entertainment Weekly last fall, Pitt — who, to be fair, in 1994 wasn’t nearly (or, at all) the household name he is now — admitted this one was one of his least favorite roles. He called it “the bitch role.” If a guy with the acting chops of Brad Pitt hated the role, I’m inclined to include it on my list.

Better choice: Frankly, I have no idea. Readers, who would you suggest?

2. Everybody, as Shakespearean characters, in Romeo + Juliet and O — These two “modern reboots” both drove me bonkers (especially the idiotic plus sign instead of “and” in the title). Leonardo DiCaprio’s one of my favorite actors, but he and Claire Danes have about as much chemistry as tap water in that movie. And Julia Stiles, Josh Hartnett and Mekhi Phifer? Go to your rooms and don’t come out until we’ve all forgotten about your terrible Othello remake.

1. Eric Bana as Henry DeTamble in The Time Traveler’s Wife — In the novel, Henry is supposed to be quirky and a little bit punk rock. No actor I can think of says NOT PUNK ROCK as much as Eric Bana. On the whole, that movie failed big-time for me, and Bana-as-Henry was the biggest reason.

Better choice: Adrien Brody (When I caught a reading/signing with Audrey Niffenegger soon after the novel came out, she mentioned Brody would’ve been her first choice. I think that’s inspired!)

What do you think? Disagree with any of these? Who’s on your list of worst miscasting in a literary role?