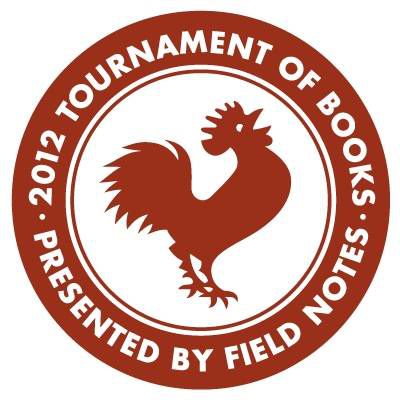 Jeff O’Neal and Morgan Macgregor are both huge Tournament of Books fans. So, they decided to read all the finalists and do some running commentary as the tournament progresses. Check back weekly for our obsessive coverage.

JO: The Tournament starts today, let’s get right into it. You’ve read all sixteen books. You’ve followed the Tournament in the past. Who are the favorites?

MM: Favorites, okay. I’m going with The Marriage Plot, State of Wonder and The Tiger’s Wife. The Art of Fielding looks strong, too, but if it gets knocked out, I’d bet on any of the other three getting a Zombie nod before it.

JO: The only zombie pick I am relatively sure of is State of Wonder; it’s sold more copies than any of the others and that’s a pretty good indication. I guess I’d go with The Tiger’s Wife after that.

JO: Any darkhorses? What of the lower-seeded titles could make some noise.

MM: I feel like The Sisters Brothers (seeded 4th) could be a shaker-upper. I’d be tempted to say it doesn’t stand a chance against State of Wonder, but with Wil Wheaton judging, I’m not so sure. If it is eliminated in the first round, I wouldn’t be at all surprised to see it rise from the dead later. Readers really love that book. Swamplandia! (seeded 3rd) might prove to have some staying power. Personally, I’d love to see Lightning Rods (seeded 3rd) stay in the game, and Mark Binelli is a weird guy, so it just might make it to Round Two (though probably not, and if so, definitely no further). I was surprised to see Green Girl in the tournament, and I’d love to say that it’s a darkhorse to watch, but frankly, it’s got zero chance against The Marriage Plot, and I don’t think it’s got enough notoriety to make the Zombie Round.

JO: Green Girl v The Marriage Plot is a really interesting pairing: one is a meditation on a certain kind of young woman and the other kinda forgets its only female character for the last half of the book. I wonder if the Booker nom gave The Sisters Brothers enough juice for a zombie slot; the bookish internet does love that book, but I wonder if that translates into votes.

MM: I think it probably does translate into votes. I mean, who are the people voting in the Tournament of Books? Bookish internet people! No?

JO: Bah. The rare reasonable point. Moving on. Which first-round matches have you especially interested?

MM: The Art of Fielding vs. Open City will be interesting. Both novels were seriously hyped, but neither was seeded first. Both are first novels, written by men who have creative day jobs and live in New York. Harbach has an MFA and a serious cool factor, Cole is the Distinguished Writer in Residence at Bard College. Both novels are excellent. I think this one’s gonna get dirty.

JO: I hope Open City kills The Art of Fielding (I don’t know what this would look like, but I would watch). It is a helluva match-up.

MM: Tell me why you think Open City should kill The Art of Fielding. I mean, I think I know how you feel about Art (overrated) but what are your thoughts on Open City?

JO: Al lright, not trying to be mean, but to me The Art of Fielding reads as Franzen Lite. Open City is considerably more ambitious, has a higher degree of difficulty, and more provocative ideas. That’s just me, though.

MM: Pitting The Last Brother (4) against 1Q84 (1) is a pretty bold move, too. I wouldn’t even know where to begin in judging those books side-by-side. That will be some interesting commentary, for sure.

JO: There’s a chance a judge could get halfway through 1Q84 and just give up. 944 pages is a lot to ask of a reader, particularly if that reader has been assigned the novel. I’d say there’s a 17% chance this happens, and The Last Brother advances by default.

MM: For sure. I wouldn’t have seeded 1Q84 first (I’d have replaced it with The Tiger’s Wife), simply because I don’t think it’s an accessible novel. That’s not to say I didn’t like it, but it would suck if it won; I think that would alienate a lot of readers and tournament followers.

JO: If you had to pick one of the books to recommend straight up to someone, what would it be?

MM: The Tiger’s Wife, no doubt. I say that because I really didn’t expect to like it. A young female doctor grappling with the effects of war in an unnamed Balkan country, retelling herself the myths of her grandfather’s life in an attempt to reconcile his death: that sounds interesting. I think it was all the rhetoric around the novel that put me off from reading for several months. You know, all that spinning webs of lush whatever and tapestries of richly wrought such-and-such…the interwoven familial histories of love and loss… the powerful majesty of the tiger…. honestly, it all sounded a little much for me. But I loved the book. I found it incredibly evocative, and rendered with a surprising lack of sentimentality and a deep sense of craft. It was also creepy, at times brutal, which always scores points with me.

JO. I didn’t like it as much as you did, but I’ll agree that it is maybe the safest recommendation (there are some books here that if you recommended them might get you punched after the fact). I’ll go with State of Wonder for its more compelling plot.

MM: Not wanting to get punched is the entirety of the reasoning behind my not recommending Lightning Rods, even though I loved it.

JO: Anything in the field that seemed out of place?

MM: None jump out at me as seeming particularly out of place, but I do feel like as a group, they’re…lacking. No weirdo manifesto. No punch-you-in-the-face memoir. I suppose that could make the tournament more interesting, instead of less. Let’s hope so.

JO: It’s definitely not as top-heavy as last year when Goon Squad and Freedom seemed like the obvious finalists and came through. There were several last year that I struggled to get through, but all of these were pretty readable. Actually, I take that back. If I hadn’t listened to the audiobook of Devil All the Time, I think I might have put that one down.

MM: Yeah, I reviewed The Devil All The Time and while I “enjoyed” it, it has some major problems.

JO: Air quotes are for cowards. What do you mean by that?

MM: Wow, you’re right. That entire last statement was ridiculous. Retracted. Here’s my beef with The Devil All The Time (I did review it): it’s a great story, but a pretty weak novel. Pollock shifts POV way too often, to the extent that we never get to know any of the characters, even the supposed main ones. Also (and this is it’s major downfall), for a novel about violence, there is surprisingly little violence. None, actually. Pollock does a nice job of explaining how and why his characters act so appallingly, and then he never shows them acting appallingly: we’re either trapped inside their heads, or else catching them right before or right after the action. So the book ends up amounting to a collection of really good setups and fall outs for things the reader never gets to see: cheap move, in my opinion.

JO: Gotcha. Alright, with that we’ve got to bring this sucker to a close. We’ll be back on Monday to dissect the first coupla matches.