Christmas has it’s rituals, for me chief among them is being read-to. 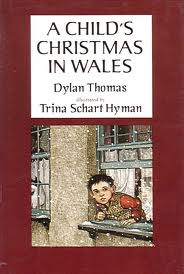 Families once a year do an extraordinary thing together, that is, they listen. In some families it’s to the BBC’s Festival of Lessons and Carols, the readers intoning plums and angels.

In others it’s Dickens’ A Christmas Carol, or Sedaris’ The SantaLand Diaries. Or Truman Capote’s A Christmas Memory.

If Dickens renews your faith, and Sedaris makes you laugh until your elf-suit hurts, and Capote captures hope in a fruitcake, Thomas still stands out. He is a spell-caster. He throws a tight little ice ball at your head. Stuns.

Though I know the characters in this prose poem – the uncles (“there are always uncles”) the cats, the firefighters, the snowballs – every year the story is as fresh as the first time I heard it. It conjures the same magic as freshly cut spruce.

Thomas, he of the famous poems “Fern Hill” and “Do Not Go Gentle Into That Good Night” is so lyric, and dramatic, – and yes, funny – that you can’t help wishing your memory of Christmases was more like his. But if you listen to him, it can be.

Elizabeth Bastos has written for The Smithsonian, McSweeney’s, and The New Yorker Magazine’s Book Bench Blog, and writes at her blog, Goody Bastos. Follow her on Twitter: @elizabethbastos