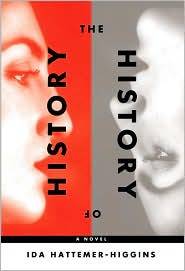 On Sunday, Flavorwire posted its list of the top 1o “most criminally overlooked books” of 2011. Since I haven’t read (or even heard of, if we’re being frank) a single novel on their list, I’m making my own. Here it is (in no particular order):

5. The History of History, by Ida Hattermer-Higgins — Fans of Haruki Murakami will love this mind-bending debut novel set in Berlin. As a matter of fact, it might be my favorite novel of the year. But sadly, it’s sitting at #623,373 on Amazon’s sales rank. If you only read one novel from this list, make it this one — it’s a beautiful book!

4. A Wild Surge of Guilty Passion, by Ron Hansen — Clocking in at #49,951 on Amazon’s sales rank, Hansen’s slim, elegant new novel takes a look at a real case of a manipulative woman convincing her lover to help her knock off her husband. It’s rich with details of the 1920s — like a modern-day The Great Gatsby — and finishes with details from the real court case — like a modern-day An American Tragedy.

3. The Omega Theory, by Mark Alpert — Fans of novels that don’t treat their readers like idiots will love this thriller that pits its protagonists against a crazy cult leader hoping to destroy the universe by crashing its “computer program.” Along the way we get cameos from quantum computing, the “It From Bit” theory and the fact that Iran might have the bomb. If you liked The Matrix, you’ll love this pulsar-paced novel.

2. The Instructions, by Adam Levin — Technically this massive (and massively brilliant) novel came out in late 2010, but because it sooooo deserves a wider readership, I’m including it. (The paperback came out in July, 2011 and is languishing north of #140,000 on Amazon’s sales rank list.) It’s the story of Gurion Maccabee, a 10-year old Chicagoan who might be the Messiah (you may recognize Gurion from last week’s Top 10 Literary Characters of the Last 20 Years post). Because of its length, it makes a great winter book — I very highly recommend it! (And lest you’re confused: No, it is not written by the same Adam Levine – with an “e” — who fronts the pop band [of questionable talent] Maroon 5. Just wanted to be abundantly clear about that. Back to the list….)

1. Domestic Violets, by Matthew Norman — This hilarious, insightful novel is starting to hit prime time as more and more readers are discovering it via word-of-mouth and raves on book blogs. But it’s still sitting at #47,772 on Amazon, so it’s certainly hasn’t quite got its due just yet. If you like Jonathan Tropper, you’ll love this story about a mid-30s dude whose life is headed off the rails.