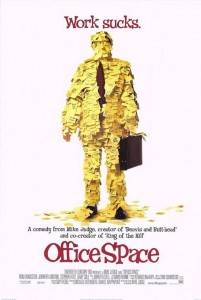 If you’re one of the millions who dutifully wakes each morning to file off to your soul-crushing day job, the only redeeming quality of which (other than financial) is that it provides you a never-ending stream of unintentional comedy to share with your friends at the bar, well, this post is for you.

It’s not hard to explain why that show and movie resonate with people: They’re both premised on the fact that the modern office environment is absurd. And so they give viewers the sense that they’re above the fray of their own cube existence. Also, both are hilarious. (Indeed, what the f$#k does “PC Load Letter” mean?)

So as much as people love Office Space and The Office, why aren’t there more novels that capture the absurdity of cube life? There are some, but not many. Here is a guess why not: Perhaps it’s because most (not all, by any stretch, as you’ll see in a sec) people who are good at writing fiction haven’t had the cube experience, like the rest of us. And therefore, they don’t see the potential for humor.

That said, the few good office novels that do exist were drawn from the personal experiences of their writers. Then We Came To The End, by Joshua Ferris, chronicles the day-in-day-out grind of a Chicago ad agency. Ferris worked in a Chicago ad agency. The Imperfectionists, by Tom Rachman, looks at the office interactions between journalists at an English newspaper in Rome. Rachman worked at an English newspaper in Rome. And finally, Domestic Violets, by Matthew Norman, is the first-person story of a mid-30s advertising copywriter whose life is lurching off the rails. Norman is a mid-30s fella who writes ad copy in Baltimore. I have no idea if his life is lurching off the rails. Probably not…

Anyway, all three of these are really good novels, and I’d highly recommend checking them out if you’re looking for some laughs…and to make you feel better about your own occupational malaise. But none are what you’d call a cornerstone-of-a-genre-great-novel, like, say, In Cold Blood (true crime) or Gravity’s Rainbow (postmodern-mind-f$#k-and-practically-inaccessible). Maybe, counter-intuitively, it’ll take a great writer who’s never set foot in a cubicle to fully imagine a great office novel. If, for instance, Philip Roth or Don DeLillo cranked out something like that, I’d freakin’ read it. But will a great writer deign to write such a novel? Probably not…

What do you think? Are there any office novels you’ve read you actually would consider great?

Before you return to your “jump to conclusions” map, it’d be great if you could comment below, mmmkay.