One of the joys of reading (aside, you know, from the joy of reading) is the discovery of new words. I am one of those people who, if I hit a word I don’t recognize (or the use of which I don’t understand in a particular context), cannot move on to the next sentence until the void in my vocabulary is filled. Yes, I used to keep a dictionary somewhat accessible at almost all times, though now I’ll just quickly call up dictionary.com on my phone (however, as a Kindle/Nook/iPad holdout, I still see the whole click-and-define feature on those devices as somehow “cheating”). 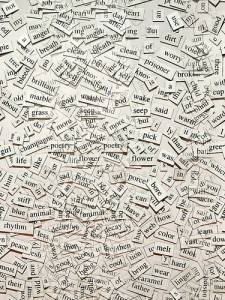 It’s the promise of that discovery that figures into the never-ending allure of reading; the language is kinda like the Internet—you’re never going to finish it. English may not have the most native speakers in the world (it’s tied for second with Spanish behind—way behind—Mandarin Chinese), but it very likely has the most words. It’s impossible to know for sure, but even conservative estimates, by the people responsible for the Oxford English Dictionary, put the number of English words at 250,000, not counting all the variations or, of course, non-universal slang (you know, the fun stuff):

The Second Edition of the 20-volume Oxford English Dictionary contains full entries for 171,476 words in current use, and 47,156 obsolete words. To this may be added around 9,500 derivative words included as subentries. Over half of these words are nouns, about a quarter adjectives, and about a seventh verbs; the rest is made up of exclamations, conjunctions, prepositions, suffixes, etc. And these figures don’t take account of entries with senses for different word classes (such as noun and adjective).

This suggests that there are, at the very least, a quarter of a million distinct English words, excluding inflections, and words from technical and regional vocabulary not covered by the OED, or words not yet added to the published dictionary, of which perhaps 20 per cent are no longer in current use. If distinct senses were counted, the total would probably approach three quarters of a million.

Considering that the more articulate among us only use about 20,000 words naturally—even Shakespeare’s works contain “only” slightly more than 30,000—it’s not too shocking that we might encounter a new word every day (technically, we could learn a new word or a new meaning every minute for a year and we would still have a ways to go).

In any event, the best word I read this week is “agroof”—a rare adverb that means “flat on one’s face,” as in, “He tried to get away, but as soon as he started running, he fell agroof.” It’s a bit slangy, but with etymologically legit roots back to the Old Norse á grúfu, or “face down.” I love it because when I first heard the meaning, I assumed, incorrectly, that it was onomatopoeia. Isn’t that what it would sound like when someone falls flat on their face? Ahhhh-groof!

Incidentally, one of my other favorite words, though I didn’t just learn it, is “onomatopoeia.”