Our Reading Lives features stories about the books that have shaped who we are and how we live. It is open not only to regular Book Riot contributors, but to guest posters from the publishing industry, authors, and….you. If you are interested in telling us about a book that has been influential in your life, please contact us: community (at) bookriot (dot) com.

This installment comes from reader Alexandra Jacunski, a graduate student in Pharmacology at The University of Toronto. She also blogs about her studies, science, and science-related books at Exercises in Auxology. 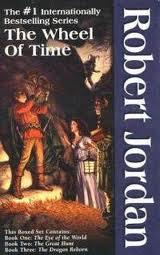 It all started when I was ten years old. I, a solitary child who had never had much luck making friends, had been moved to Poland. A few months into my time there, my mother and I were perusing the selection at the English-language bookstore near our home. The selection was almost entirely divisible into two genres: books about learning English, and Penguin classics. The former didn’t interest me at all; my aversion to the latter has since only been justified by Tess of the D’Urbervilles.

One group of books, however, drew my young eyes. As a voracious reader even at that age, the main reason for my attraction to them was their length: the shortest appeared to be no less than six hundred pages and I, having a propensity for devouring novels in a single afternoon, looked forward to having a whole series to read.

The book series was named The Wheel of Time, and it was written by Robert Jordan.

At the beginning of high school, I discovered an online community centered on the books called TarValon.net. Still introverted at best, I joined the site and found myself among a group of people who loved reading as much as I did, who felt as connected to Jordan’s creation as I did and, most importantly, were looking for something that they couldn’t quite seem to find in the “real world.” To this day, eight years down the road, I find myself checking in at the site from time to time.

Over time, I’ve found that fantasy is far from my favourite genre. I usually try to pick books from which I feel I can learn things, whether those things are concrete (like the history of science) or less so (like new ways to look at the world). I don’t feel like fantasy has a whole lot to offer in that area.  The writing is, more often than not, nothing special. It’s not that the books are poorly written – they just don’t challenge me as a reader. But the beautiful thing about fantasy is that the author doesn’t create fictional characters in the world in which you live. He creates his own universe, and in it, makes a home for people who don’t quite feel like they belong in this one. Fantasy immerses you as a reader in a way that no other genre can quite manage for just that reason. It has nothing to do with whatever magic the writer imbues in his story. It’s the magic of feeling like you’re stepping out of your current life completely.

I realized recently that I return to the genre at my loneliest times. I stopped reading The Wheel of Time when I got to university, where I finally started coming into my own. When I moved away from New York, which involved leaving my boyfriend and most of my friends behind, I found myself beginning A Game of Thrones and grad school only days apart from each other. And, like anyone in my age range, the Harry Potter series has kept me company since the third grade, a familiar story to be read on a rainy day.

On the one hand, it embarrasses me that it is The Wheel of Time that has defined much of my life up to this point. I’d love to blow you all away with a profound choice that imbues me with wisdom beyond my years, but gives me a hip-and-happening edge at the same time. I really would. At the same time, I’m okay with The Wheel of Time as a starting place. Ask me in a few years what book defined my twenties, and I’ll give you something deeper. For now, I’m just glad that I’d found books that were true companions for so many years.