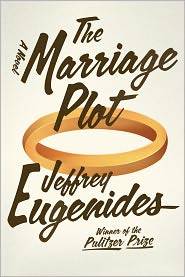 Here’s an unusual, slightly silly way to tell how popular a modern novel is: Check its Wikipedia page. If the entry is approximately as long as it is for, say, classic novels like War and Peace or Pride and Prejudice, you know you’ve got a winner. The page for Middlesex, Jeffrey Eugenides’ 2002 novel, is nearly 12,000 words. To use a technical literary phrase, that is obscenely long — but justified, as Middlesex is an obscenely good novel.

Indeed, Middlesex about an hermaphrodite named Calliope/Cal, is one of those relatively rare books that has been both a bestseller (it’s sold nearly 3 million copies), and a literary darling (it won the Pulitzer Prize). Like many readers, it was one of my favorites of the aughts. And like many readers, I’ve waited eagerly for Eugenides’ follow-up.

Finally, after nine long years, today is the day! The Marriage Plot, arguably the most anticipated novel of the year, is finally out today, and I for one am bouncing-on-the-balls-of-my-feet excited. The novel, which traces the lives of three college students in the early ’80s, is already garnering some really positive reviews — including this one from the NY Times‘ Michiko Kakutani. It’s Eugenides third novel — The Virgin Suicides is his 1993 debut (also a great movie!), followed up nine years later with Middlesex.

Clearly, there’s something about that extended (nine years two different times, in Eugenides’ case) publishing schedule that works well for writers of a certain age. Jonathan Franzen also took nine years to publish his follow-up (Freedom) to The Corrections last fall. Freedom was, in a word, amazing. And David Foster Wallace had spent 12 years on his follow up to Infinite Jest before offing himself in 2008. This wonderful article from the NY Post offers some explanation for the long “gaps” in publishing for these writers, gives some insight into the struggles of writers of Eugenides’, Franzen’s and DFW’s generation, and explains how they found inspiration in each other.

Anyway, if it’s true that absence makes the heart grow fonder, there’s about a 99.67 percent chance I’m going to love The Marriage Plot. Do you plan to read it? You should! And please stop back and let us know what you thought!