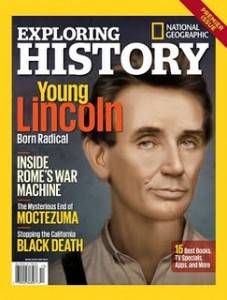 I have a new crush. Its name is Exploring History and it’s published by National Geographic! It’s the new kid in the stacks… this month is its premier issue. It features a young Abraham Lincoln on the cover and I swear (seriously this time, I’m not exaggerating) he’s looking right at me. I’m pretty sure I know what that means. It wants me to read the magazine! I know! I’m not sure I’m ready for that yet, I mean, we just met. However, it did boast that it has a list of FIFTEEN books, apps, etc. inside its covers. I know size isn’t supposed to be important, but come on… I couldn’t resist. So, it’s true – I read the magazine. You’re the only one I can tell, Diary. If I tell my friends they’ll all be like, “FIFTEEN?! Are you serious? I have to have a look!” And then my super-secret romance will be over and everyone will know about its attention to detail in the articles (no rushing here… it takes it sweet time like a real magazine should), and that it even keeps its promises. It’s been so long since I’ve been with a magazine that’s kept its promises (they all tell you that they’ll give you the secret to shiny hair and then never follow through — bastards). Not Exploring History. No. At the end of this premier issue — there it was, the spread I was promised… a list of history books, TV specials, websites, exhibits, and apps. And, oh Diary, I almost lost control when it lovingly whispered a secret in my ear… there is an app for the British Library*. Not only can you see Shakespeare’s first folio, Charles Dicken’s handwritten draft of Nicholas Nickleby and Jane Austen’s teenage writing, but much, much more!

Oh Diary, I am in love. In LOVE. I just had to tell someone. I’ll write more later — I’m off to spend more time with my new crush.

*This app is officially called British Library: Treasures and is available on Android and iPhone for $3.99.