The news this week, ever since Wednesday’s passing of Apple Inc. founder Steve Jobs at the age of 56, has been filled with stories and commentaries on “How Steve Jobs changed the way we ______.” You can fill in that blank with almost anything: live, think, communicate, study, shop, listen, learn. Perhaps, even the way we dress (apparently, sales of his trademark black mock turtleneck are soaring). And there is at least one article out there honoring Jobs for his company’s contributions to the game of golf.

And, of course, devices like the iPhone and iPad are changing the way we read books (and magazines and the daily “paper” and everything else) and also the way we write, though not always for the better and sometimes against our best intentions (damn you, autocorrect!). The iPad was even hailed by the book industry as “the Jesus tablet” for its potential to bring e-books to the masses and make them profitable for publishers. And while Jobs is not wholly responsible for the way the rise of the digital age has both burdened and broadened our language, he and his ideas have played a major role and his company has itself added many new words to the English lexicon, not to mention introducing the phenomenon of putting a little “i” in front of just about everything.*

*My wife is an ophthalmologist and a couple years ago I ordered her what I thought was a hilarious T-shirt custom-printed with the word “iDoc.” It dawned on me the other day that she’s never worn it. I asked if she still had it. “Oh,” she said. “Yeah.” That was the end of the conversation.

However, what I hadn’t fully realized until this week is that Jobs has also had an effect on everything we read, not just on screen, but in books, too, and (physical) magazines and newspapers, on signs and posters, and anything else designed and printed in the last few decades with aid of a computer. Not necessarily the content, but what we see when we look at words. Open any book and you’ll likely notice it somewhere between the copyright and the acknowledgments: the name of the font.

As Simon Garfield—the author of Just My Type: A Book About Fonts—explains, Jobs “made Type Gods of us all:”

Steve Jobs didn’t invent typefaces, of course; I think Johannes Gutenberg may have had a stronger claim to that in Germany when he used his first carved letters in the 1440s. But Jobs realized their value like no one else engaged in personal computers in the early 1980s, and suddenly we were no longer dependent on professional printers, graphic designers and those long dark nights of the soul with rub-down letters.

Shortly after Jobs dropped out of Reed College, he took an art class and discovered calligraphy, learning about serif and sans serif typefaces. Ten years later, when he designed and released his first Mac, it came with something unprecedented: a wide choice of fonts. 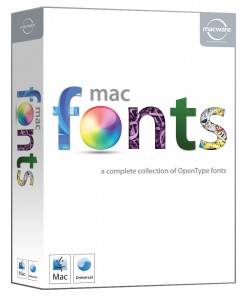 Jobs had enlisted a designer and together they created new bitmap designs in a range of styles and sizes, which Jobs named after cities he loved: London, Chicago, Geneva, Toronto, Venice, Los Angeles, and San Francisco. More familiar names, like Times New Roman and Helvetica, would soon join the list. And, of course, thousands more were to follow…so much so that the Fonts menu can be more of an annoyance (really who’s ever needed Gloucester MT Extra Condensed?) than a cornucopia of additional opportunities to express ourselves through our words. But ‘twas not always that way:

…the ability to change fonts on our computers seemed like technology from another planet. Before the Macintosh of 1984, most primitive word processors offered up one dull face, often on a green screen, and good luck trying to italicize it.

So just remember that the next time you’re trying to decide between Calibri and Cambria—or realize with surprise that a particular novel was “a quick read.”

P.S. One more way (or rather, two) in which Jobs will impact how we read: in the coming weeks, his life story is spawning at least two new books: one by former Newsweek editor-turned-biography-machine Walter Isaacson and another—in comic form.