Normally, I am among the last to spot trends in publishing, particularly of the supernatural tendency. It wasn’t until I read The Last Werewolf by Glen Duncan earlier this year that it clicked in my brain that maybe this werewolf thing had something to it, forgetting completely the many books even I myself had read that had featured werewolves. I’m not the most observant person in the world, I admit.

But very recently, on a long car trip, from New England to DC, I had a moment of clarity. I was listening to the audiobook of Alma Katsu’s newly published novel, The Taker, and in it, there is a scene (and I swear this isn’t giving anything away) wherein a deaf woman is made to pull up a plant, but only after her master and his servant have walked a considerable distance away and covered their ears. Before it’s revealed what the plant in question is, I knew immediately that it would be a mandrake. In case you’re not familiar, a mandrake is typically thought to be a magical root appearing very human in resemblance, used for a variety of purposes, and “according to the legend, when the root is dug up it 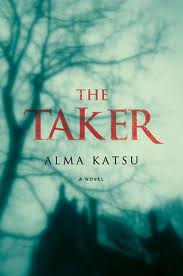 screams and kills all who hear it” (from Wikipedia).

For any Harry Potter fan, the reference is not unfamiliar. In Harry Potter and the Chamber of Secrets, Prof. Sprout has the students harvesting mandrakes that are squalling babies when they’re first picked, which are then used to cure the petrification of several students. But the mythical mandrakes have appeared in several books I’ve read recently, and I’m hazarding a guess that a certain literary trend is on the rise: magic. And specifically, alchemy (or more crudely, potion-making).

It would be easy to trace the recent rise in magical themes in adult literature back to everyone’s favorite spectacled teenager, but I find this trend much more subtle and complicated than just the waving of wands and incantations. In fact, the magic or alchemy in adult literature right now is primarily historical in setting, and sometimes, doesn’t really exist at all. It’s only the hint or suspicion of witchcraft in some cases and, in others, it is truly consorting with the devil that puts the magic entirely on another plane from Rowling’s series. These are settings in which magic exists to have serious, sometimes fatal, consequences, either for those practicing or for bystanders. Many of these stories are dark and scary. They are, plain and simple, magic for grown-ups. (Full confession: I got my first recent hint of alchemy in adult fiction with the Lady Grey series by Deanna Raybourn, an addictively readable historical romance, that I’m admitting to loving for the first time right here).

Here are five recent novels that take magic to a whole new adult place, on a scale ranging from “maybe there’s a witch here, let’s burn her!” to “the candlesticks are floating, how is he doing that?!?”

Whether you’re in the mood for a little hocus pocus in advance of Halloween, or you’d just like a book you probably wouldn’t give to anyone under 15, grown-up magic is here. Of course, I may still be a little late in predicting this trend. After all, I’m looking at my bookshelves and realizing I’ve got a book from 1993 I’ve never read that possibly fits within this category: Paulo Coelho’s The Alchemist. Like I said, I’ve never been particularly observant.