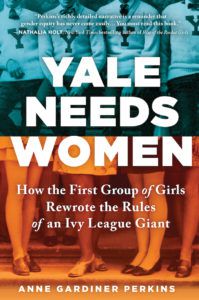 In the winter of 1969, young women across the country sent in applications to Yale University for the first time. The Ivy League institution dedicated to graduating “one thousand male leaders” each year had finally decided to open its doors to the nation’s top female students. The landmark decision was a huge step forward for women’s equality in education. Or was it? Yale Needs Women is the story of how these young women fought against the backward-leaning traditions of a centuries-old institution and created the opportunities that would carry them into the future.

at Brightly: Surefire YA Scares: 13 of the Best Teen Horror Books

at Buzzfeed: 20 Books Under $20 That You’ll Fall In Love With This Autumn

at CBR: 10 Most Faithful Comic Book Adaptations in Film

at Electric Lit: 10 Books About Being Queer in a Country Where It’s Illegal

at Epic Reads: 18 of the Most Foreboding Book Titles in YA

at Get Literary: 5 Binge-Worthy Reads to Feed Your Reality TV Obsession

at LitHub: From Gutting Fish to Making Pastry, 12 of the Fall’s Biggest Cookbooks

at Paste: The Best Audiobooks of September 2019

at Tor: 5 Non-Fiction Books That Will Put You in an Astronaut’s Boots