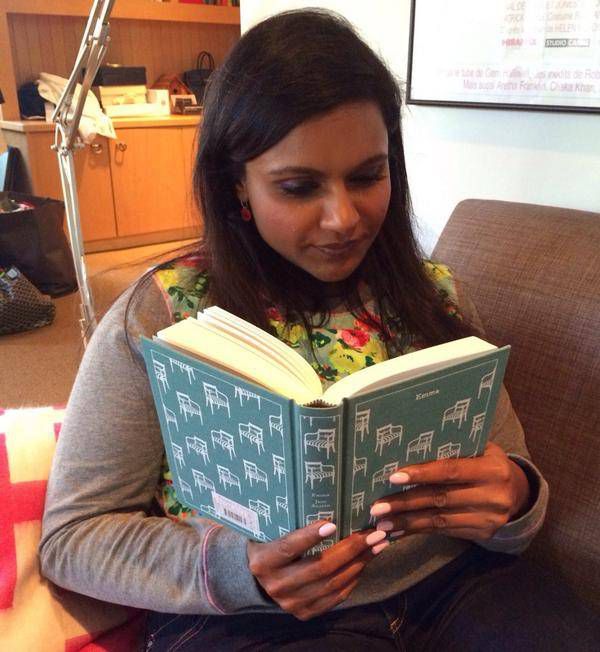 Mindy Kaling is one of my favorite people to follow on social media. She’s witty, and she’s charming, and she’s also a reader. She regularly let’s us peek over her shoulder by posting pictures of the books she’s been reading. So here, for your viewing pleasure, are just a few of the many books she has recommended over the last few years.

1. In Other Words by Jhumpa Lahiri

Hey @LauraMLippman! Thanks for making present buying so much easier! pic.twitter.com/AbwJ8Jy0W4

3. Germany: Memories of a Nation by Neil MacGregor

This cool book came in the mail today with a ribbon but no note. Mystery gift! In my mind it’s from Christoph Walz. pic.twitter.com/4rr4axC4ko

4. Pride and Prejudice by Jane Austen

In between slayin dudes and eating BBQ, #ireadeverywhere. Where do you read? @nypl pic.twitter.com/Pas0dyEBXW

6. The Girl on the Train by Paula Hawkins

Sith Lord on plane reading The Girl On The Train

7. The Year of Yes by Shonda Rhimes

Michael spiller gave me a signed bridget for Christmas!

11. Lean In: Women, Work, and the Will to Lead by Sheryl Sandberg

Getting treated to some major truths and funniness in Yes Please. I love you Amy Poehler. pic.twitter.com/cAtz2Xz3QI

14. The Lowland by Jhumpa Lahiri

15. What Falls Away by Mia Farrow

this arrived when I got home. So excited.

16. I Was Told There’d Be Cake by Sloane Crosley

17. The Bassoon King: My Life in Art, Faith, and Idiocy by Rainn Wilson

Look at this beautiful man. Celebrate Diwali by buying #thebassoonking by @rainnwilson. It’s hilarious and personal and there are fleeting references to me.

18. It’s All Good by Gwyneth Paltrow

Brushing up on my Michael Lewis for this weekend in San Fran. He is nothin but the hits.

20. One More Thing: Stories and Other Stories by B.J. Novak

And of course, I would be remiss if I didn’t mention Mindy’s own books: Why Not Me?…

Whoo hoo! #WhyNotMe has sold over 250,000 copies since it came out a few months ago. Thanks for reading it and sharing it with people you love! ❤️??

And my personal favorite, Is Everyone Hanging Out Without Me? (And Other Concerns)

Thanks The Strand! I hope many bookstore meet-cutes happen by this stack of books