Many of us can remember the very first books that got us into sci-fi and fantasy, often in our tender years—mine were J.R.R. Tolkien, the Dragonlance Chronicles, and Anne McCaffrey’s Dragonriders of Pern.
But what do you give to a modern adult reader who’s new to the genre? And why not make it more difficult: on the SFF Yeah! podcast, Sharifah and I narrowed it down even further, and gave ourselves each a single gateway novel to introduce a new reader to fantasy.

On my part, I wanted to pick something a little less classic and a little more contemporary than my own gateways, so mine is Sorcerer to the Crown by Zen Cho. 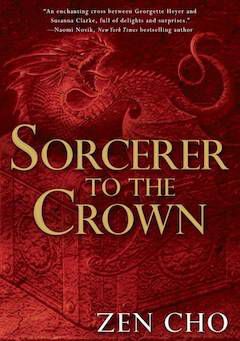 “[When it came out] I was at the bookstore and we just sold it to a crazy cross section of people. It was amazing how easy a handsell it was to people who wouldn’t normally pick up a fantasy book.

“What I think Zen Cho did in this book is that she captures the sort of baseline of fantasy. This is a novel set in olde-time Britain, and there’s lords, and there’s dragons, and there’s fairyland. It has all of the elements of the classic fantasy, but she’s really updated it in that you have a main character who is black, [which] doesn’t happen in classic fantasy really often. You have multiple characters of color. It goes beyond the borders of England, it’s got a slightly international cast, and it has a female character who I just die for. Oh my goodness. Prunella is amazing. The basic plot [is] that the main character, Zacharias, is a freed slave. He was brought up by a wealthy white family, and he is now a grown man, and is the Sorcerer Royal of the Unnatural Philosophers, which is the sort of magician organization in Britain.

“The problem that they’re having is: magic is drying up. When they go to do spells, there’s literally not enough magic for them to do it. His job now is to find out what is going on as well as try to wrangle this organization of, quite frankly, old white men who want nothing to do with him and are super mad that he’s in charge now. Then, in the process, he makes a side trip to give a lecture at a girls’ school and finds all of these young women doing all of this magic. They don’t seem to have any trouble with the shortage of magic. Prunella is this very powerful self taught young woman who decides that she’s going to join Zacharias on his adventure, whether or not he’s interested. Hijinks ensue…and it’s so much fun.”

Sharifah picked The Ballad of Black Tom by Victor LaValle. 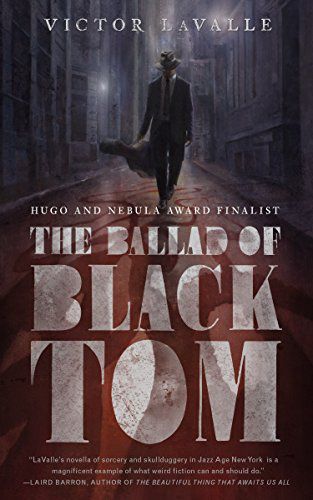 “This is an award winning novella, it won The Shirley Jackson Award for Novella and it was nominated for the Hugo and Nebula in the same category. It’s just a really good, really dark, really creepy book. I think anybody will love it.

“The story follows Charles Thomas Tester, which is, in my opinion, a great name. Charles lives in the black community of Harlem with his father [in] 1924. Charles is basically making money with charisma. He’s a street performer and he also performs on shady dealings. This is how he keeps a roof over his and his father’s heads. But he takes one job with a mysterious, powerful book involved. He takes this book to an elderly woman’s home and she turns out to have some really strange powers and you can tell immediately she is not the right sort of person to be around or to have any sort of dealings with.

“Of course, this all leads to trouble, this delivery that he was supposed to do for a job. Charles’s interactions with her basically land him right in the middle of a couple of cops and there’s a brute and a scholarly type and both of them are awful, and bigoted, and down to inflict violence on Charles. It goes from one bad thing to the next. After a really terrifying harrowing pursuit, Charles ends up at a mansion where he meets this wealthy man named Robert Suydam, who wants to hire him to perform at this big party because Charles always carries around this empty guitar case and this is when things get really strange.

“[B]eing inside the mansion doesn’t necessarily provide the relief he’s looking for because there’s something really off about Robert and the promises he makes to Charles. There’s definitely something wrong with what Charles sees at the party and things are brought to a fever pitch and between the troubles that happen in consequence of meeting this woman who wanted the book, the cops, and Robert Suydam, Charles’s world gets completely turned on its head.

“I picked this book because even though it’s really short, which also makes it a really an easy read, especially if you don’t necessarily want to get right into an epic fantasy series, he is really successful in flushing out these characters and making them feel real. It’s easy to develop an attachment to them, which is to say that there is some tough reading in here. There are some really horrible things that happen to Charles and his family. I should also warn you that this book, it’s really gory and it’s definitely a bit of nightmare feel. I picked it because it does a really solid job of illustrating how powerful the genre can be, how powerful fantasy can be, and because plenty of it is grounded in reality and history. Because it’s hard sometimes to jump into fantasy that takes place in a time, and place, and a world that is completely removed from yours, especially if you don’t normally read that stuff or you don’t know how you feel about it.

“It’s set in a more recognizable world. It also has the right elements: the magical book, the creature feature feel, and a surreal sort of glister, which I loved. And I’m not a fan of Lovecraft’s fiction, but this is basically LaValle doing Lovecraft and I really, really enjoyed his take.”

The above quotes were taken from Episode 16 of SFF Yeah!, and were lightly edited. You can listen to the full episode and subscribe below; the gateway books discussion starts at 27:36.