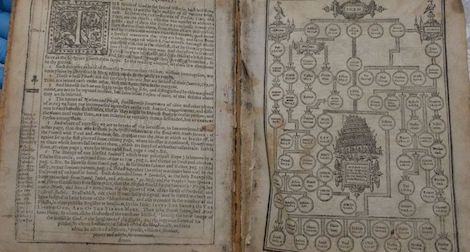 Sponsored by our giveaway of $100 to spend on YA lit!

In April 2017, a routine insurance appraisal of the Carnegie Library of Pittsburgh’s rare book collection revealed 321 missing items, including atlases, maps, plate books, photograph albums and manuscripts valued by experts at around $8 million. Since the news broke, the Federal Bureau of Investigation has been on the case, recovering fragments and intact volumes worth an estimated $1.6 million. Last week, a 1615 Geneva Bible similar to one brought from Europe by Pilgrims traveling aboard the Mayflower joined the collection of rediscovered tomes.

These stories are endlessly fascinating to me as a reader.

In recognition and celebration of the 100th anniversary of Children’s Book Week, which begins today, the Library of Congress launched an online collection of digital versions of “historically significant” children’s books published more than 100 years ago. The 67 titles in Children’s Book Selectionsinclude well-known tales such as Humpty Dumpty and Little Red Riding Hood, as well as “lesser-known treasures” from the LOC’s collection.

On April 10, 2019, an international team of scientists working on a project called the Event Horizon Telescope (EHT) released an image of a supermassive black hole at the center of the galaxy Messier 87 (M87). Several years in the making, the image was created from data compiled by a number of telescopes spaced across the planet.

The EHT team is a large and diverse group, including many early-career Ph.D. students and postdoctoral researchers from the U.S. and abroad. Rebekah Frumkin spoke to nine of those scientists, all in their twenties or early thirties, about what they like to read, how the black hole is like a work of art, and their advice for writers depicting black holes in their work.

Adding anything to your TBR?