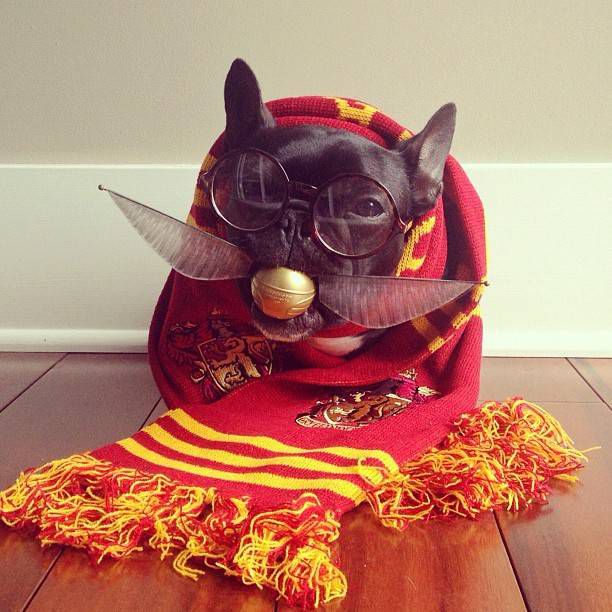 For the record, I have never dressed my pets up in costumes of any kind. But when it comes to bookish pet costumes, that “awwwww” switch turns on in my brain and I’m a goner. Here are 15 of my very favorites:

You might recognize Trotterpup from her fame as “the most fashionable French Bulldog on the internet.” Trotter’s ensembles have included everything from Kanye West disguises to haute couture fashion, but I’m partial to this bookish Harry “Trotter” costume, photographed in her San Francisco home.

2. Gandalf, Frodo, and Galadriel from The Lord of the Rings trilogy by J.R.R. Tolkien 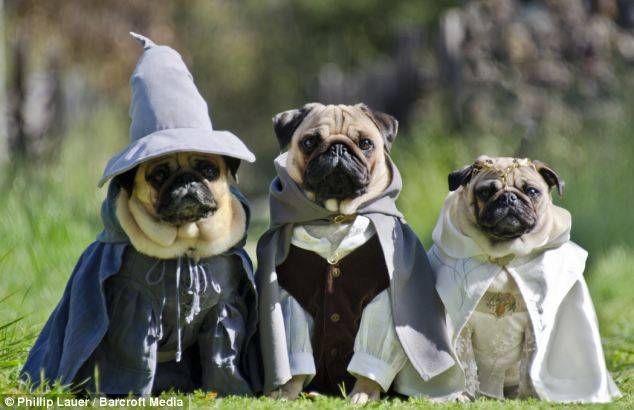 Phillip and Sue Lauer have been dressing up their pugs Blue, Bono, and Roxy at their home in Sonoma County, California, for six years, and drew inspiration from their love of Lord of the Rings for this bookish “Pugs of Middle Earth” photo shoot.

3. Hester Prynne from The Scarlet Letter by Nathaniel Hawthorne 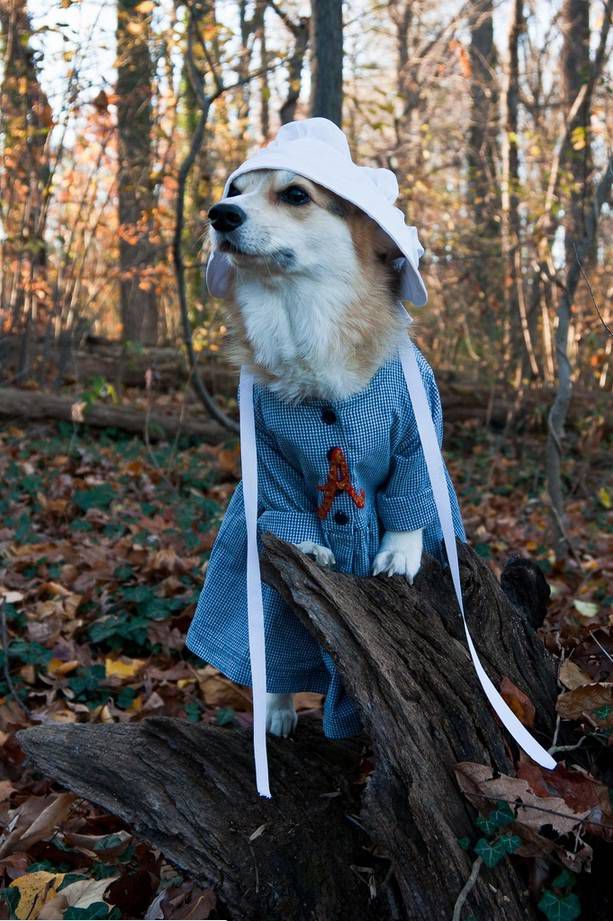 Washington, D.C. based photographer Eric Schweik photographed his pup in this costume of Hester Prynne in tribute to American wood carver and dog lover Stephen Huneck after Huneck’s death in 2010.

4. Scarlett O’Hara from Gone With the Wind by Margaret Mitchell 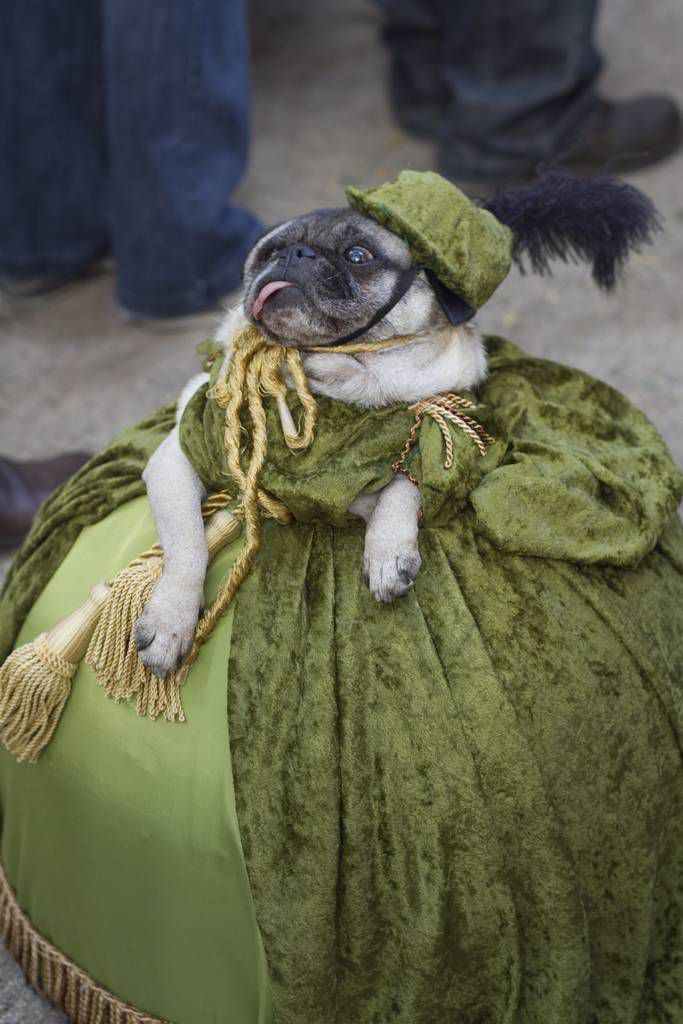 Every October in Tompkins Square Park, hundreds of New York’s East Village dog owners show off their costumed pups to a panel of judges. Gracie the pug is a perennial winner, and here she shows off her winning 2010 Scarlett O’Hara costume, drapes and all.

5. Carol from Where the Wild Things Are by Maurice Sendak 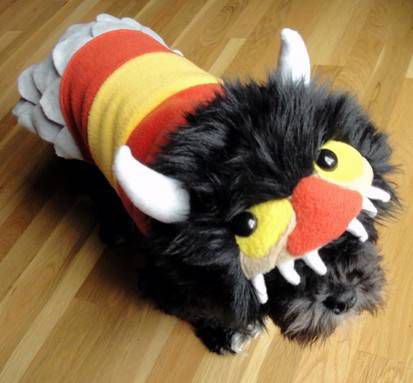 Washington based designer Kristal Schwartze hawks adorable monster hats and outfits from her Etsy shop FairlyEnchanted. This Where the Wild Things Are critter costume has already been snatched up, but the good news is that she accepts custom orders. 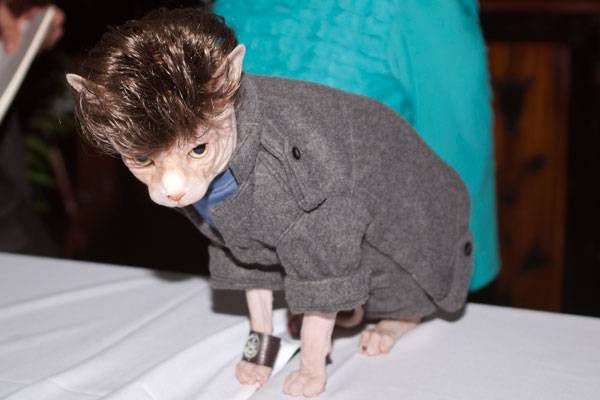 Every year, Midtown’s Algonquin Hotel hosts a feline fête for New York’s cat elite, held in honor of the famous Algonquin Hotel cat, Matilda. This Edward Cullen kitty takes the cake, but other standouts from this year’s literary-themed cat fashion show include Madeline, the Mad Hatter, the Scarecrow, annnnd… 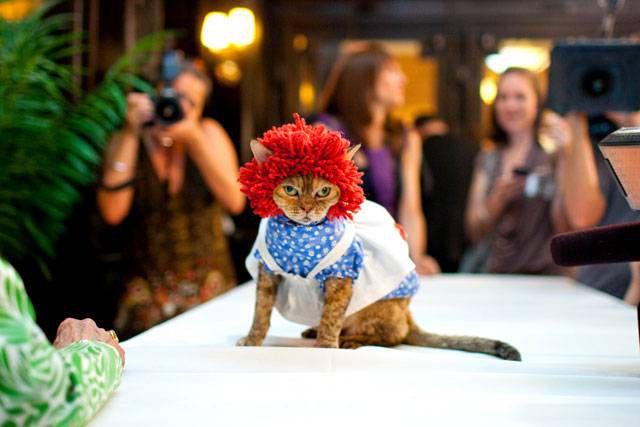 8. Musketeer from The Three Musketeers by Alexandre Dumas 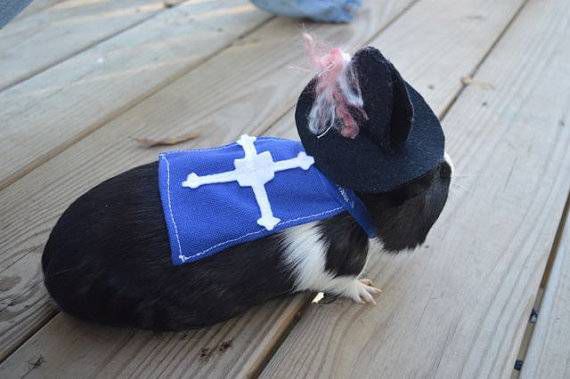 Washington, D.C. based Etsy shop Marmota Café specializes in rodent-sized capes and costumes for bunnies, chinchillas, Guinea pigs, hamsters, hedgehogs, and more. Because someone had to do it, right? This li’l Three Musketeers Guinea pig costume is my favorite, and I’m also into the White Rabbit cape. 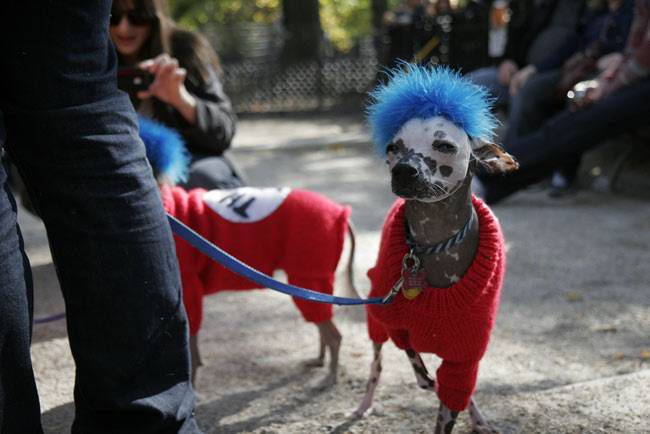 10. Max from How the Grinch Stole Christmas by Dr. Seuss 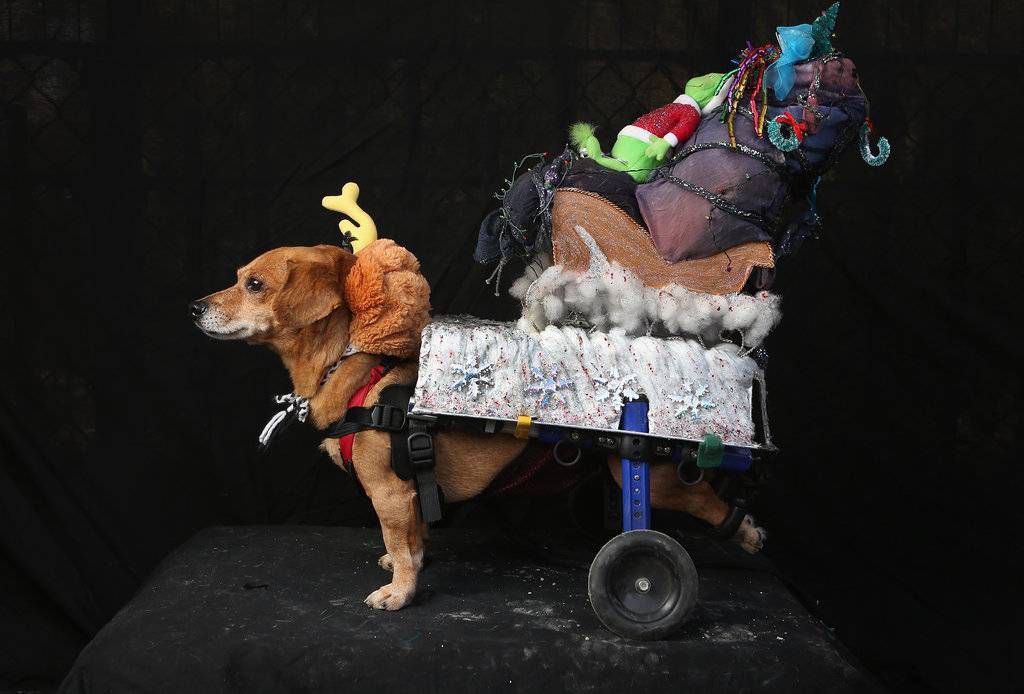 Not to be outdone by Thing 1 and Thing 2, this pup costumed as Max from Seuss’ How the Grinch Stole Christmas also entered the Tompkins Square Park Halloween contest. 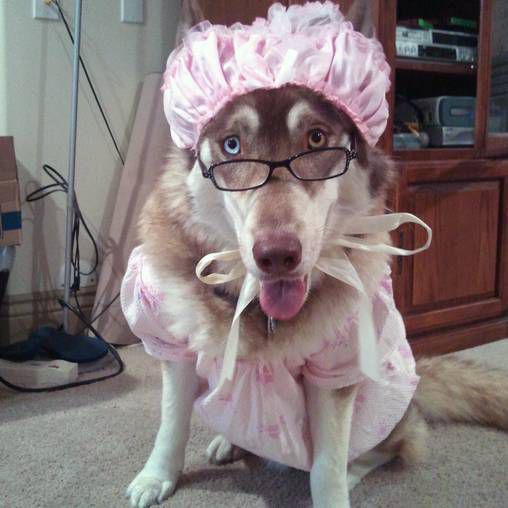 12. The Queen of Hearts from Alice’s Adventures in Wonderland by Lewis Carroll 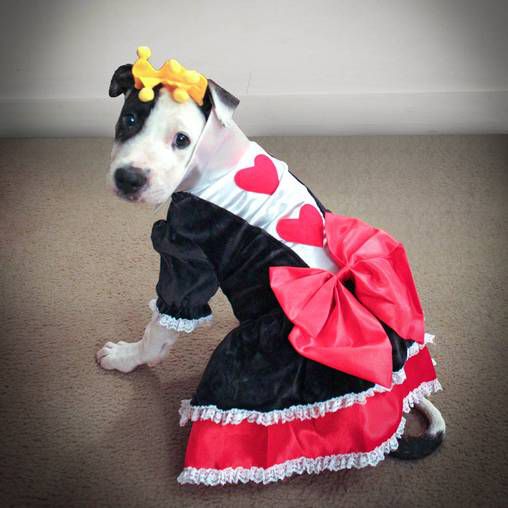 Ares didn’t have the only literary costume entry in last year’s Costume Works contest. Puppy Zi dressed up as the Queen of Hearts.

13. The Mad Hatter from Alice’s Adventures in Wonderland by Lewis Carroll 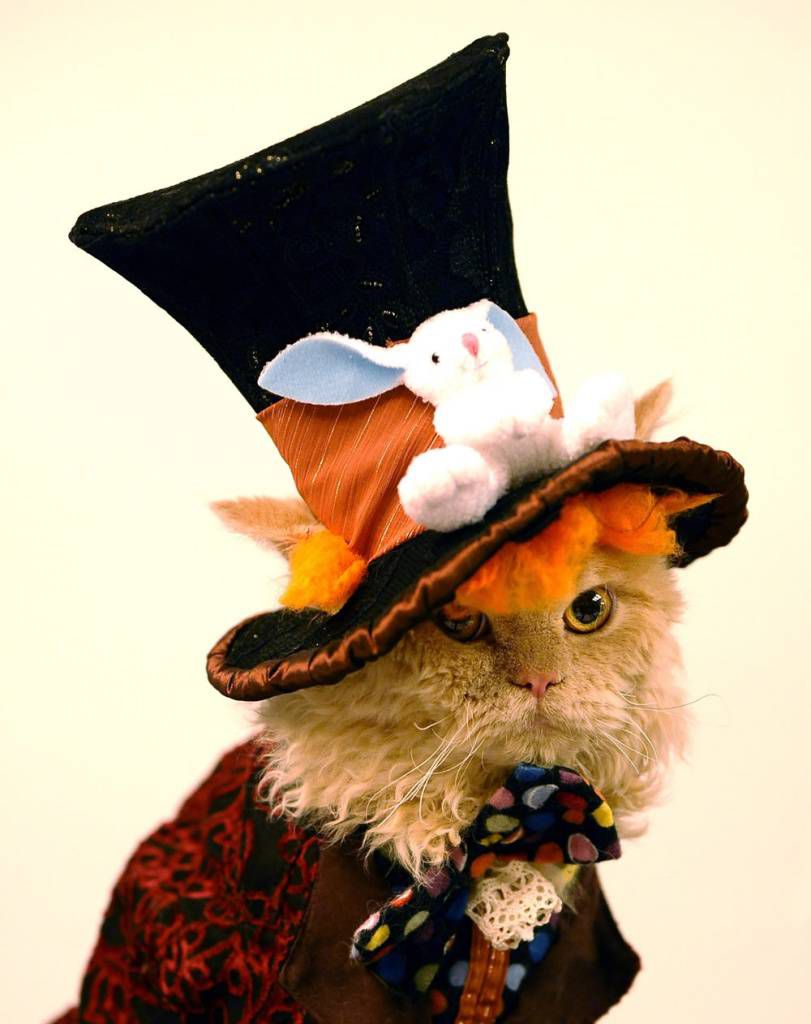 This American Curl Cat is decked out in a Mad Hatter costume during “Meet the Breeds”, an event co-hosted in mid-October by the American Kennel Club and the Cat Fanciers Association at New York’s Jacob Javits Center.

14. Satyr from The Chronicles of Narnia series by C.S. Lewis 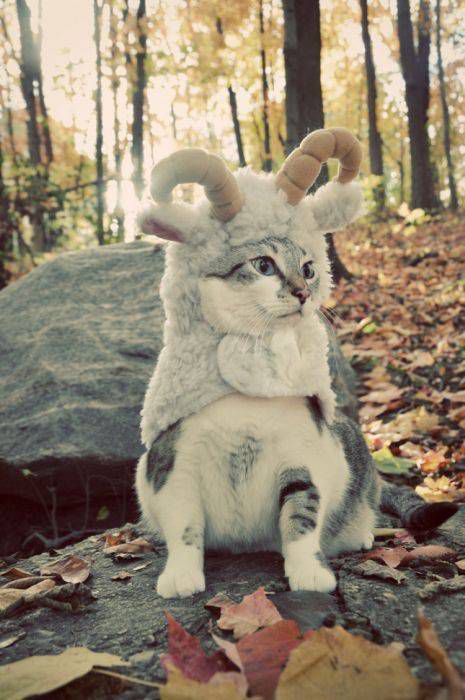 You can thank Indianapolis based designer Kelly Lynn Mitchell for giving this gift to the internet. Although comment threads have debated whether this costume is more Narnia or Where the Wild Things Are -inspired, I think everyone can agree that it’s ADORABLE. 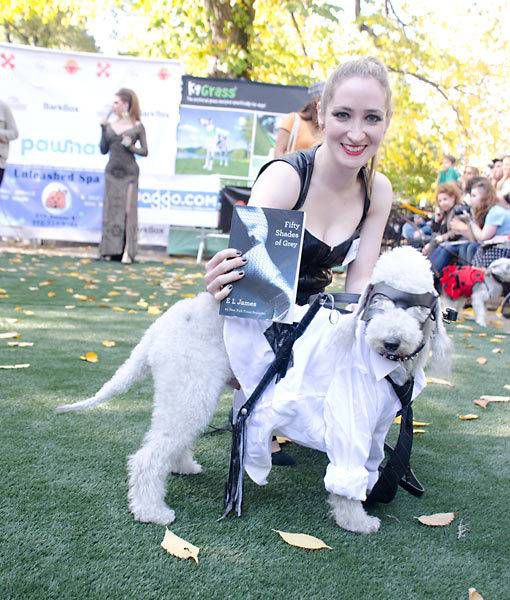 Save the best for last, right?! Here’s another priceless costume from the Tompkins Square Park Halloween parade. I’m not here to judge.