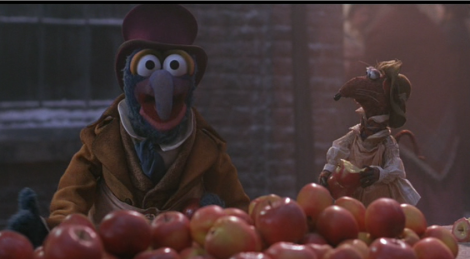 This is a guest post from Bryan Kozlowski. Bryan is the author of What the Dickens?! – Distinctly Dickensian Words and How to Use Them. A member of the Dickens Fellowship, Bryan has written on Dickens’ life and legacy for Slate, Country Life magazine, and Anglotopia.

Most of us have grown up with Scrooge’s Christmas Eve escapades. We know the plot, the catch phrases, the every “bah, humbugs!” like the back of our hands. The names Ebenezer, Jacob Marley and Bob Cratchit are now as deeply familiar to us as Santa, Rudolph, and Frosty. We know it all. Or do we? What is it about those Victorian names that haunt our yuletide imagination? What are they hiding about the characters we re-invite into our homes every year? And what, moreover, do they say about Dickens’ supposedly simple tale that may not be so simple after all?

Let’s start with the surname that, frankly, is one of fiction’s finest. Scrooge – a name that entered the dictionary with seamless ease because there’s just something inherently miserly, curmudgeonly, even villainous, about the sound of “scrooge.” Honestly, could a scrooge be anything different? That talent for creating characters with names that perfectly and phonetically characterize them was certainly one of Dickens’ literary hallmarks, but there’s much more going on with Scrooge’s surname than just a nasty-sounding syllable.

Most agree that Dickens based Scrooge on scrouging – an archaic word with a multitude of “squeezing, crushing, crowding” meanings – likely based on the Old English scruze, “to squeeze or compress.” Dickens first used scrouging (spelled scrowding) in his fourth novel, The Old Curiosity Shop, using it to describe a particularly crowded and crushing audience at a London theater. But Dickens obviously felt the word was too good and expressive to use just once. Three years later Scrooge burst onto the literary scene, loyally living up to his scrouging roots. A merciless money squeezer, Scrooge is “a tight-fisted hand at the grindstone…a squeezing, wrenching, grasping, scraping, clutching, covetous old sinner!”

Others insist Scrooge’s name is far easier to decipher, pointing to the fact that a miser, in Victorian slang, was commonly called a screw. Indeed, Dickens even calls Scrooge “a wicked old screw” in the story – making scrooge an obvious pun Victorian Brits wouldn’t have easily missed. But as screw and scrouging are believed to share the same linguistic root, both are technically correct.

There’s not much to say about Scrooge’s first name, though it’s equally appropriate. Ebenezer has its root in the Hebrew word for “stone” – rather an apt simile for Scrooge’s stony heart: “Hard and sharp as flint…secret, and self-contained.” It also importantly foreshadows the one stone that will ultimately jumpstart Scrooge’s salvation – his own “neglected” tombstone confronted at the climax of the tale. “Oh tell me I may sponge away the writing on this stone!”

As ghostly names go, Jacob Marley’s isn’t exactly the creepiest. Sure, it might be an adequate name for a cold-hearted bookkeeper, but a terrifying specter? Could Dickens have done any better? Absolutely not. And here’s why: there’s something far more creepy going on below the surface of Marley’s name, literally.

Marley is an obvious reference to marl, an archaic word for “earth” or “soil,” in this case, the soil of graves and cemeteries. Why so obvious?  Because Dickens takes repeated pains to press that very same point, “emphatically,” at the opening of the story: that “Marley was dead,” that he’s been in the grave for seven long years, that he’s all dust and ashes and dirt (or should be) by the time he finally reunites with Scrooge. “This must be distinctly understood,” insists Dickens in chapter one, “or nothing wonderful can come of the story I am going to relate.” And Marley’s well-chosen name is there to help us believe him all the more: that old Jacob should now be only a part of the earth, certainly not walking it.

Marley’s first name, “Jacob,” is less certain. It could be an allusion to the biblical story of Jacob (the one who dreamt of a ladder ascending to heaven while getting a nice promise of success from the Almighty). Likewise, Marley has also climbed the ladder of success on earth. He was an “excellent man of business,” says Dickens. He just didn’t know he was climbing in the wrong spiritual direction (and who could go any way but down with the weight of all those chains?).

However, those who’d prefer a less moralized explanation for “Jacob” might consider the word Jacobus – the name of an obscure golden coin minted in England under the reign of James I.

No one knows for sure if Dickens even caught this coincidental link, let alone created it, though it certainly fits the fictional man whose life entirely consisted of counting out coins, or as Marley himself admits: “My spirit never walked beyond our counting house…my spirit never roved beyond the narrow limits of our money-changing hole.”

It’s no coincidence that the Cratchit family gets the best food scene in the book. From roast goose to plum pudding, mashed potatoes to gin punch, their Christmas feast (though a humble one) remains one of the jolliest eating scenes in classic literature. But then again, it’s all there in the Cratchit name. Cratch was an English dialect verb for “to eat heartily,” literally “to eat like a horse.” A cratcher, therefore, was a “hearty eater,” with both words probably being a reference to the feeding trough from which horses and other animals ate from, also called a cratch (from the Old French creche, “manger”).

The sad part, of course, is that hearty eaters aren’t always guaranteed hearty meals and the Cratchit’s Christmas dinner, unsurprisingly for a family bordering on poverty, is decidedly skimpy. And that’s where the name “Bob” comes into play.

It reminds us of the dismal living Bob Cratchit actually makes working for Scrooge – just a handful of shillings a week – bob being a Victorian (and still current) British slang for shilling. But just in case we miss the pun, Dickens drives the point home: “Think of that! Bob had but fifteen ‘bob’ a week himself.” 15 shillings amounts to a measly three-quarters of a British pound, this at a time when, Dickens tells us, a whole salmon for dinner cost 26 shillings. But before you go blaming Scrooge for paying starvation wages, 15 shillings was about the acceptable going rate for early-Victorian office clerks like Bob Cratchit. Still, heaven knows how he supported a family of eight hungry cratchers on so little.