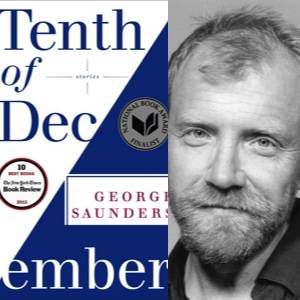 You know those times when you read something fantastic and afterwords you are in a bit of a daze?

That just happened to me, as I finished George Saunders’ excellent short story collection, Tenth of December.

It was named one of the best books of the year by a few places you may recognize:

At the back of my edition of Tenth of December he is interviewed by David Sedaris. It’s actually more of a conversation than an interview but Sedaris still remembers to ask him a question or two, and Saunders’ answers are, well…  at times, really insightful and (stay with me) inspirational.

Here are 11 of my favorite parts from Saunders’ answers. Readers (and writers) of all sorts will find something that tickles them here.

On whether writing fiction amounts to “doing something” in the world

1. “To me, fiction is the ultimate form of “doing something”. An idea or notion or image leaves the writer’s mind, goes directly into the reader’s, and has the potential to change what it finds there. (Of course, this can be good or bad. Witness Mein Kampf, or that Chernyshevsky novel What Is to Be Done?, the reading of which was said to have made Lenin what he was, i.e. a merciless, mad-dog killer. Go, fiction!)”

2. “I like the idea that a work of fiction is basically just some timeless human dilemma, dressed up in contemporary clothing.”

3. “So: There is no such thing as a “level playing field”, genetics and karma being what they are, and to the extent that we pretend there is such a thing (by conflating wealth with virtue) we are playing a fool’s game, taking credit for that which was given to us (a good family, health, affluence, basic ability, intelligence, et cetera, et cetera) by fate.”

4. “But it seems to me that if we want to look at, say, “love”, using fiction as the lens, then we’d really want to challenge love: give it something to push back against; construct a situation in which it could show its true colors, so to speak.”

5. “A writer’s flaws are what he has to work with. To get any forward momentum, I have to make stories that have drama, which for me often means putting some overt threat in there. And I’m not subtle. To make “threat” and thereby “drama” I will just – you know, create a kindergarten teacher and then introduce an approaching Mongol horde. In the midst of a crisis is where we get the true measure of a character, and thus some new feeling about human tendency.”

6. “Anyway, what I really think good writing does: It enlivens that part of us that actually believes we are in this world, right now, and that being here somehow matters. It reawakens the reader to the fact and the value of her own existence.”

On writing characters who are “decent”

7. “I think a character who is basically like the writer and the reader (good, sensible, intelligent, well-intentioned, and so on) is going to produce a more deeply felt ride. Fiction gets most under our skin, I think, when we find it impossible to distance ourselves from the narrated dilemma. What creates distance is when we look at a character ad think, “Nope, not me, I would never have reacted that way.” Whereas if the character does pretty much what we would do in the given situation, and thinks the way we would think – then we cant step away from him when the shit hits the fan.”

On teaching along with writing.

8. “There’s something very heartening about teaching, in a “There’s nothing new under the sun” way: You realize that there have always been, and will always be, young artistic people in the world who, being relatively new to the world, are freshly amazed by its beauty.”

9. “There’s something wonderful about spending a day taking apart a Tolstoy story to see how it works, and then getting up the next morning, feeling like: Okay, I’m still alive, still writing, still part of that lineage – and therefore there’s still a chance that, one day, I’ll do something good.

On leaving short stories and writing his first novel.

10. “Well, just between you and me, I hate short stories. But I became addicted to the big bucks that being a career short story writer brings. But finally I’ve had enough and am going to write a novel, even if I have to take a pay cut and risk losing my audience and give up on movie rights and all of that. I don’t care, I’m all about the art.”

11. “So far it’s a lot of fun, and about every other day it seems like a big fiasco, a completely unviable train wreck, which, based on my experience with stories, indicates that it might be a worthy adversary.”

If you like short stories even a little bit, I strongly recommend you add this book to your cart.