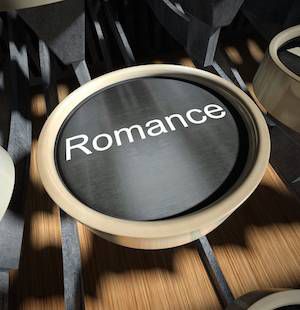 I spent a good chunk of last week at the Marriott Marquis, dodging Times Square tourists and getting my mind blown by the amazing speakers at the Romance Writers of America conference. Writers from all across the country (along with bloggers and press, but I deeply believe that every person there was working on a book) gathered to network, pitch their books to agents and editors, and above all learn from each other. And there was some quality learning to be had. I’m not sure I will ever write a novel, but damn if now I don’t feel like I could! And the best advice and information I heard could easily apply not just to romance, but to any kind of writing. So for all you writers and reviewers out there, here’s a round-up of the best things I heard at RWA.


I don’t actually know what the take-away is here except that Maggie Worth is absolutely hilarious and I will be looking up her books forthwith. As you might be able to tell from the above, she writes both mystery and romance.

2. “It’s not true that diverse books don’t sell; [publishers] don’t know how to sell diverse books.” – Alisha Rai
As you might expect, a fair amount of time was spent talking about diversity in the romance market, both in terms of characters and authors. There were several sessions about the various aspects of incorporating diversity, and (as you will be able to tell) I went to all of them. As the success of some titles in the market has shown, diverse books can and will sell — but how willing/able publishers are to market them is a different conversation entirely. (Bonus: Alisha Rai will be speaking at Book Riot Live!)

3. “‘Has Black Characters’ is not and should not be a genre.” – Farrah Rochon

Kissing Books Newsletter
Sign up for Kissing Books to receive news, book recommendations, and more for residents of Romancelandia.
Thank you for signing up! Keep an eye on your inbox.
By signing up you agree to our terms of use
In response to the standing perception that books with black characters need their own imprint, or different kinds of marketing campaigns, Farrah Rochon hit the nail on the head. If the book is a paranormal fantasy (with black characters), why not market it as paranormal fantasy? If it’s a historical about the 1600s (with black characters), what makes the marketing any different from any other historical? It’s an interesting question to ponder.

4. How you write [diverse characters] is more important than should you write diverse characters.
The question of how to write cross-culturally (i.e. how to write characters that come from a different racial or ethnic background than yourself) came up many times. Most speakers agreed that writing cross-culturally was important, because multicultural characters normalize diversity. There were several excellent pieces of advice on how to do it well:
– “It’s better to make one person squeamish with your question [about a diverse character] than making a mass of readers squeamish by getting it wrong.” – Farrah Rochon
– “Don’t describe your black characters like food — unless your hero(ine) is a pastry chef or otherwise food-obsessed.” – Farrah Rochon
– “Go to the MAC counter and look at the way they are naming the shades!” – Seressia Glass (I love this tip.)

my button collection is really coming along #RWA15 pic.twitter.com/XkOtdzpMNU

5. “If you’re stretching your writing abilities, and not writing the same book over and over again, not all of your readers will like every book you write.” – Julia Quinn
Julia Quinn gave a thorough keynote session on how to handle the pressures of being a published author, particularly relating to bad reviews from friends, family, critics, and strangers alike. And as an author with more than 20 books under her belt, she would know!

6. “When you give up on pleasing everyone, you learn to write the story you need to write.” – Julia Quinn
This piece of advice in particular had the whole room taking notes and nodding. As Quinn pointed it, it’s easy to get lost in the pressures of series, market trends, reviews, and deadlines; it’s much harder to remember that writing is an individual and incredibly personal pursuit.

7. In digital, there’s no such thing as backlist.
There was a ton of shop-talk at RWA, and all of it was fascinating. I learned things that I hadn’t known in 10 years of publishing industry convention-going. One of the most interesting things to come up (and not just once) was the lifespan of an e-book. Ballantine told attendees that for them, there is no backlist with e-books. The online market is “a never-ending bookstore,” and they’re working to leverage the book over its full lifespan, not just 8 weeks. Sourcebooks is also experimenting with rebranding campaigns and new covers for their full list. And I think this is genius. Bookstores do this a lot with section displays, themed tables, and staff picks; it’s great to see publishers playing with their full lists and not just their most recent publications.

9. When there’s too much external conflict, your book becomes shallow or two-dimensional.
This was another gem from the LGBTQ Panel (further apologies for not being able to source it). Because this is true in all genres — if your hero/ine’s major struggles are entirely at the hands of forces beyond her control, your book reads as a never-ending series of action sequences without motivation. Internal conflict does a plot good, is what we’re saying.

10. Want stories that throw stereotypes and industry tropes out the window? Look to self-publishing and small presses.
Y’all, did you know certain imprints have actual PLOT GUIDELINES?? I had no idea. Because of this, and because of the prevailing “default” whiteness and heterosexuality of many imprints (particularly historical), many speakers pointed to self-publishing and small presses as the place where new, exciting stories were being written. I wish I had better notes on how to find those stories, aside from asking around on your favorite romance-friendly social media platform; one speaker suggested using Amazon category searches as a good way to explore. I did jot down authors — traditionally published and otherwise — mentioned by others more than once, and that list is below.

11. “Fiction helps people see the humanity in others, regardless of culture or sexual orientation” – Piper Huguley
We probably already know this one, but it always bears repeating. Fiction is the best way to get into someone else’s shoes, whether those shoes go to space or the bedroom, the West or the ballroom, the board room or the beach. Here’s to all the amazing writers I met last week — thanks for giving us new shoes to walk in!

Nota bene: I had to pick and choose what I went to, like at any busy conference, and there were definitely excellent sessions on craft and the business of publishing that I missed. Luckily, there were many live-tweeters in attendance! Check out the #RWA15 hashtag.