This post is sponsored by The Women in the Walls by Amy Lukavics. 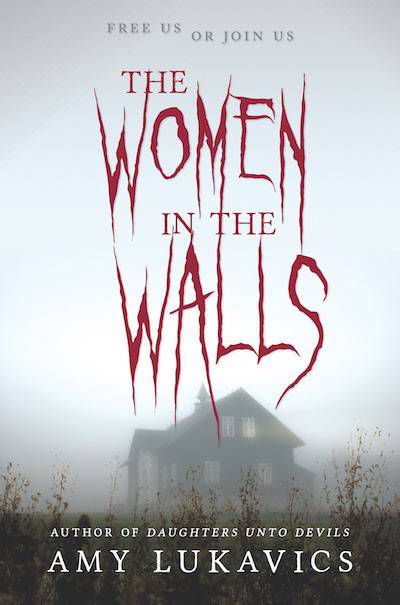 Lucy Acosta’s mother died when she was three. Growing up in a Victorian mansion with her cold, distant father, she was left to explore the dark hallways of the estate with her cousin, Margaret.
When her aunt Penelope disappears, Lucy is left devastated and alone. Margaret has been spending a lot of time in the attic, claiming she can hear her mother’s voice whispering from the walls. Emotionally shut out by her father, Lucy watches helplessly as her cousin’s sanity unravels. Then, she begins hearing voices too.

One of the most common requests I see from YA readers is for books that contain little or no romantic elements to them. A couple of years ago, one of the biggest complaints I read across the book blogging and greater literary world was how there were “too many” books in YA with a romance at the center of the story. There were “too many” love triangles and “too many” stories where love was more important than anything else in the book.

I’m not a reader who fancies a romance in her books. A lot of times, I don’t pay attention to it in the story. In YA books, romance adds a lot of tension and often, it fits in fine with the story — teenagers are the main characters and their hormones are raging, so it’s not a surprise to see it play out in the page in ways that do or do not make sense. Because of that, I disagree with the notion that there are “too many” or that there is “too much” in terms of romance in YA books. Does it sometimes feel unnecessary? Sure. But a lot of times, it’s pretty natural to how teenagers are in the real world.

That said, knowing how many readers are hungry for books where romance takes a huge backseat or, perhaps, isn’t present at all, I thought it would be useful to create a big list of must-read YA books where there is little to no romance in the story.

This was not easy.

Finding YA books written by authors of color where there is little or no romance is challenging. Not because those authors aren’t writing them. Instead, it’s because the pool of those books is already tiny to begin with. As I found with a number of the books I chose to include, many of these skew on the younger side of YA and could, in some cases, easily be handed to middle grade readers. I also found many of these books are a little bit older, meaning they might be challenging to come by today.

The other challenge was defining what “little to no romance” meant. In the creation of this list, some of the books may feature characters who have a significant other but that partner plays little or no role in the story beyond a passing one. Some of these stories may have a kiss or two, but again, it’s in the interest of experimentation and teenagerness, rather than in any way that advances or adds tension to the plot of the story. Some of the books on this list, too, are first in a series, and there are no guarantees that later installments don’t go down a romantic road. . . though by book two or three or six, perhaps that romance feels like a necessary and welcoming element. In short, “little to no romance” simply means that romance is way in the backseat, with no driving force in the narrative. 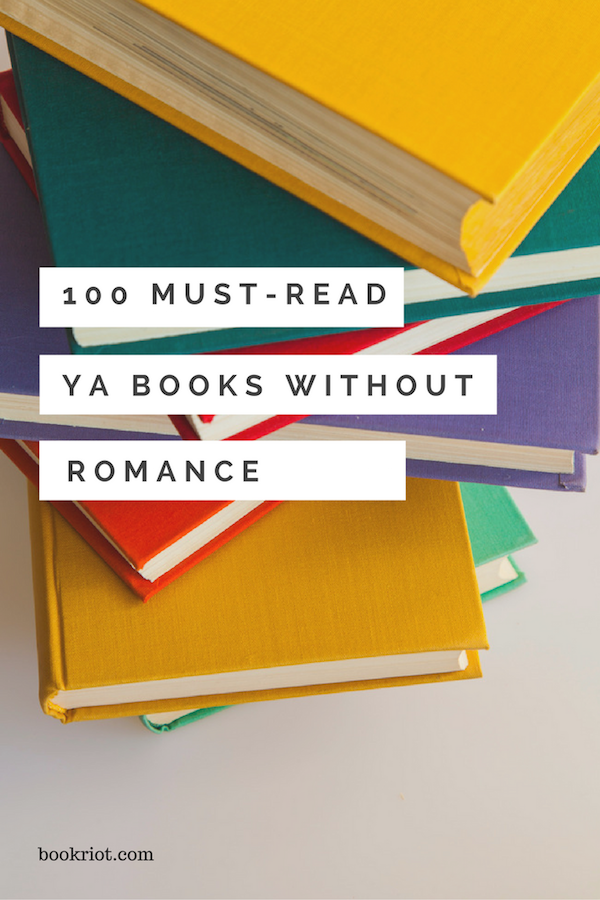 Just because a book doesn’t feature a romance, though, doesn’t mean it’s an easy book nor that it’s not a book tackling tough, gritty topics. Many of these books do just that. Other books are pure adventure stories, science fiction romps, constructed entirely in fantasy worlds, or spine-tingling thriller or horror reads. I’ve included historical fiction, as well, which is where one can find books with little or no romance most easily. There is literally something for every kind of YA reader, along with books that represent the nice wide swath of landscape that YA books not take up in our cultural and literary histories. In other words: you’re getting classics, award winners, and titles that are pretty new. To really give a sense of how many books exist here, selections were limited to one per author.

Remember: the next time someone bemoans the state of YA fiction, no matter what it is they’re bemoaning, know they’re probably wrong. In this instance, it’s about romance — there are plenty of great YA reads with little or none of it.

1. A Madness So Discreet by Mindy McGinnis

2. A Step From Heaven by An Na

3. A Trick of the Light by Lois Metzger

4. As Red As Blood by Salla Simukka

7. Between Shades of Gray by Ruta Sepetys

11. Charm and Strange by Stephanie Kuehn

18. Does My Head Look Big In This? by Randa Abdel-Fattah

22. Finnikin of the Rock by Melina Marchetta

25. Half Brother by Kenneth Oppel

27. How It Went Down by Kekla Magoon

28. How To Say Goodbye in Robot by Natalie Standiford

29. I Am Princess X by Cherie Priest

30. I Hunt Killers by Barry Lyga

31. If I Ever Get Out Of Here by Eric Gansworth

35. Inside Out by Terry Truman

36. Inside The Shadow City (Kiki Strike #1) by Kirsten Miller

41. Jumped In by Patrick Flores-Scott

42. Killer of Enemies by Joseph Bruchac

45. Life As We Knew It by Susan Beth Pfeffer

48. No Parking At The End Times by Bryan Bliss

49. Nothing by Janne Teller

50. On The Edge of Gone by Corinne Duyvis

52. Parrot in the Oven: Mi Vida by Victor Martinez

63. Some Girls Are by Courtney Summers

66. Summer of the Mariposas by Guadalupe Garcia McCall

69. The Absolutely True Diary of a Part-Time Indian by Sherman Alexie

70. The Adoration of Jenna Fox by Mary E Pearson

71. The Alchemyst by Michael Scott

72. The Boneshaker by Kate Milford

73. The Book Thief by Marcus Zusak

74. The Chocolate War by Robert Cormier

75. The Compound by SA Bodeen

76. The Cuckoo Song by Frances Hardinge

77. The Dead Girls of Hysteria Hall by Kate Alender

78. The Disreputable History of Frankie Landau Banks by E. Lockhart

79. The Fixer by Jennifer Lynn Barnes

80. The Girl From The Well by Rin Chupecho

81. The Golden Compass (His Dark Materials #1) by Philip Pullman

82. The Golden Day by Ursula Dubosarsky

83. The Knife of Never Letting Go by Patrick Ness

85. The Memory of Light by Francisco X Stork

86. The Outsiders by SE Hinton

88. The Sky Inside by Clare B. Dunkel

90. The Thief by Megan Whalen Turner

91. The Wicked and the Just by J. Anderson Coats

92. This Savage Song by Victoria Schwab

95. Under A Painted Sky by Stacey Lee

99. When I Was The Greatest by Jason Reynolds