One of my favorite formats, and one that’s abundant in the young adult designation in particular, is the verse format. I love novels, as well as non-fiction, that is thoughtfully and skillfully crafted in verse. It’s a skill few writers possess well, since it’s so much more than simply breaking up prose into lines and calling it done. There needs to be clear thought and purpose behind the format, since it reflects the voice and perspective of the character.

But damn, when a verse book is done well, it is done well. The craft behind it, the voice that drives it, and the way it builds a story and character and time period and setting can make verse books spectacular.

Want to get started? Let me offer up 100 YA books in verse. These range from novels to non-fiction, as this category of books is privileged to have writers who can easily navigate both through poetry. Because YA has writers who are prolific in their verse writing, I’m limiting selections to no more than 2 books per author, meaning that this list will showcase dozens and dozens of unique writers and perspectives. I’ve marked with a * those authors who have far more than two YA verse novels so that the eager can dive realllllllllly deep. Some of these flirt with the middle grade/YA line, but I’m including them because the few here add to the dynamic format.

I’ve also only listed first titles in a series, in order to offer up a wider variety of reads. Finally, again in the interest of offering the widest range of books possible, I’ve included some verse titles that the entire book is not in verse, but rather, parts of it are or individual voices in a cast are.

Get ready to get your verse reading on! 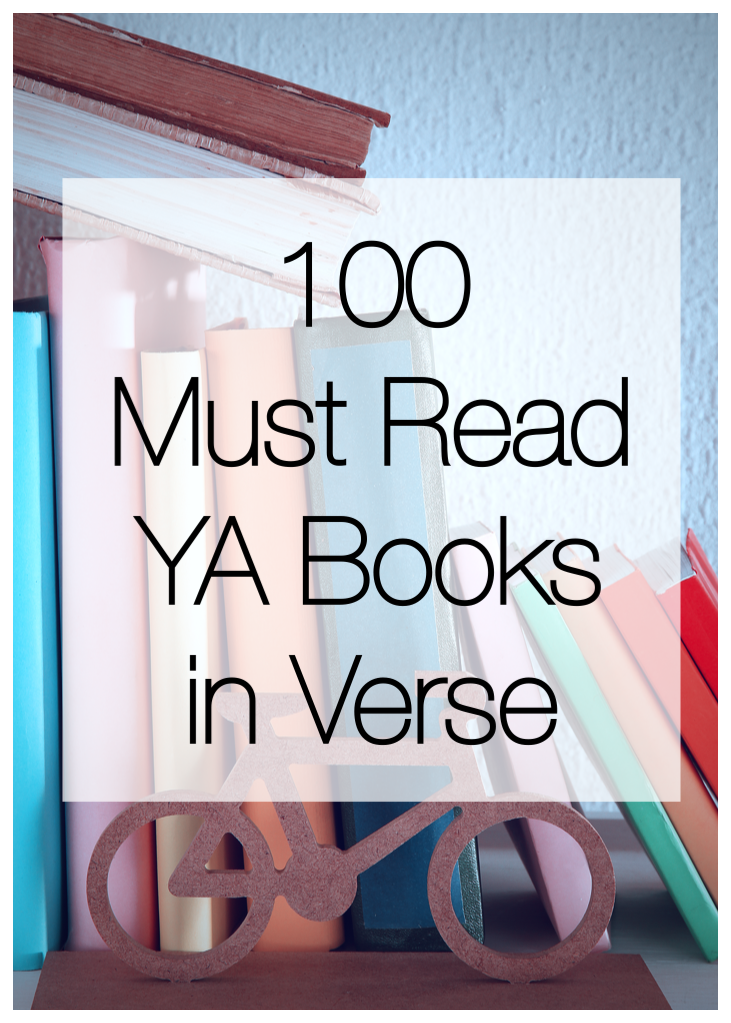 2. After the Death of Anna Gonzales by Terri Fields

3. After The Kiss by Tera Elan McVoy

4. All The Broken Pieces by Ann E. Burg*

5. All We Have is Now by Lisa Schroeder*

7. And We Stay by Jenny Hubbard

8. Ask Me How I Got Here by Christine Heppermann

12. A Bad Boy Can Be Good For A Girl by Tanya Lee Stone

14. Because I Am Furniture by Thalia Chaltas

19. By the River by Steven Herrick*

25. The Crossover by Kwame Alexander

26. The Day Before by Lisa Schroeder

27. The Death of Jayson Porter by Jaime Adoff

32. The Firefly Letters: A Suffragette’s Journey to Cuba by Margarita Engle*

34. Forget Me Not by Carolee Dean

36. The Geography of Girlhood by Kirsten Smith

38. Girl Coming in for a Landing by April Halprin Wayland

41. The Good Braider by Terry Farish

42. A Heart Like Ringo Starr by Linda Oatman High

43. Heaven Looks A Lot Like A Mall by Wendy J Maas

45. How I Discovered Poetry by Marilyn Nelson

46. How To (Un)cage A Girl by Francesca Lia Block

48. I Don’t Want to Be Crazy by Samantha Schutz

53. The Language Inside by Holly Thompson

56. The Lost Marble Notebook of Forgotten Girl and Random Boy by Marie Jaskulka

57. Love and Leftovers by Sarah Tregay

59. My Book of Life By Angel by Martine Levitt

60. October Mourning: A Song for Matthew Shepard by Lesléa Newman

61. One by Sarah Crossan

62. One of Those Hideous Books Where The Mother Dies by Sonya Sones*

64. Out of the Dust by Karen Hesse

65. Out of This Place by Emma Cameron

69. Psyche in a Dress by Francesca Lia Block

71. The Realm of Possibility by David Levithan

74. Running Back to Ludie by Angela Johnson

75. The Secret of Me by Meg Kearney

81. Song of the Sparrow by Lisa Ann Sandell

82. The Sound of Letting Go by Stasia Ward Kehoe

86. The Surrender Tree: Poems of Cuba’s Struggle for Freedom by Margarita Engle

88. Three Rivers Rising: A Novel of the Johnstown Flood by Jame Richards

89. A Time to Dance by Padma Venkatraman

90. Two Girls Staring At The Ceiling by Lucy Frank

91. Under the Mesquite by Guadalupe Garcia McCall

93. Up From The Sea by Leza Lowitz

94. The Watch That Ends the Night by Allan Wolfe

95. The Weight of the Sky by Lisa Ann Sandell

96. What My Mother Doesn’t Know by Sonya Sones

97. Who Killed Mr. Chippendale? A Mystery in Poems by Mel Glenn

98. Who Will Tell My Brother? by Marlene Carvell

99. You Remind Me of You: a Poetry Memoir by Eireann Corrigan

100. Your Own, Sylvia: A Verse Portrait of Sylvia Plath by Stephanie Hemphill*