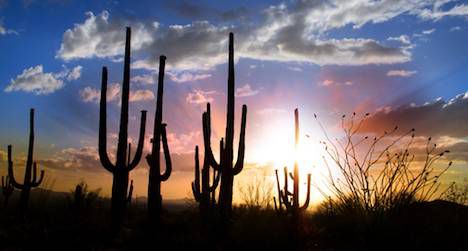 I thought The Southwest was much bigger than it actually is, until Wikipedia told me otherwise. Turns out, The Southwest region consists of Arizona and its surrounding areas, but no other complete states: the southeasternmost part of California’s Inland Empire up into the bottom of Nevada; the lower areas of Colorado and Utah in the Four Corners region; the Western half of New Mexico, and a tiny corner of West Texas.

But there is still a huge literary tradition in the Southwest region of the United States, and here are the books you should read either about or taking place there.

Note: There is, amazingly, no crossover with this list of books about the American West.

The Bean Trees by Barbara Kingsolver

The King and Queen of Comezon by Denise Chávez

The Guardians by Ana Castillo

The Last Summer of the Death Warriors by Francisco X. Stork

Walks Away Woman by Ki Longfellow

In the Heart of the Canyon by Elisabeth Hyde

Everybody Sees the Ants by A. S. King

Waiting to Exhale by Terry McMillan

If I Fix You by Abigail Johnson

Wraiths of the Broken Land by S. Craig Zahler

Once in a Promised Land by Laila Halaby

Where they Bury You by Steven W. Kohlhagen

Detained and Deported: Stories of Immigrant Families Under Fire by Margaret Regan

How the World Moves: The Odyssey of an American Indian Family Family by Peter Nabokov

Ladies of the Canyons: A League of Extraordinary Women and their Adventures in the American Southwest by Lesley Poling-Kempes

Trauma Red: The Making of a Surgeon in War and in America’s Cities by Peter Rhee

Unreal City: Las Vegas, Black Mesa, and the Fate of the West by Judith Nies

At the Border of Empires: The Tohono O’odham, Gender, and Assimilation, 1880-1934 by Andrae Marak and Laura Tuennerman

Grandma’s Santo on its Head by Nasario Garcia

In the Shadow of Billy the Kid: Susan McSween and the Lincoln County War by Kathleen P. Chamberlain

House of Rain: Tracking a Vanished Civilization Across the American Southwest by Craig Childs

Portrait of an Artist: A Biography of Georgia O’Keefe by Laurie Lisle

Blood and Thunder by Hampton Sides

The Man Who Walked Through Time by Colin Fletcher

The Grand Canyon and the Southwest by Ansel Adams

American Ghost: A Family’s Haunted Past in the Desert Southwest by Hannah Nordhaus

The Jaguar’s Children by John Vaillant

The Quiet Streets of Winslow by Judy Troy

Bad Country by C. B. McKenzie

The Carrion Birds by Urban Waite

Rage against the Dying by Becky Masterman

The Blessing Way by Tony Hillerman

The Visitant by Kathleen O’Neal Gear

Desert Heat by J. A. Jance

Cool in Tucson by Elizabeth Gunn

All The Wild That Remains by David Gessner

Refuge: An Unnatural History of Family and Place by Terry Tempest Williams

Demigods on Speedway by Aurelie Sheehan

Touched by an Alien by Gini Koch

The Milagro Beanfield War by John Nichols and Rini Templeton

The House of the Scorpion by Nancy Farmer

Return of the Bones by Belinda Vasquez Garcia

Pieces of Sky by Kaki Warner

She Who Remembers by Linda Lay Shuler

The Way Home by Megan Chance

What Price Paradise by Katherine Allred

The Brothers Torres by Coert Voorhees

Wake Up Maggie by Beth Yarnall

One True Theory of Love by Laura Fitzgerald

Night at the Fiestas by Kirstin Valdez Quade

The Tijuana Book of the Dead by Luis Alberto Urrea

Sagrado: A Photopoetics Across the Chicano Homeland by Spencer R. Herrera et al

Three-Ten To Yuma and other Stories by Elmore Leonard

Camille Carries the Mail by Lisa Hodgkins and Carlos Lemos

Legend of Ponciano Gutierrez and the Mountain Thieves by A. Gabriel Meléndez and Amy Córdova

What are your favorite Southwest reads?