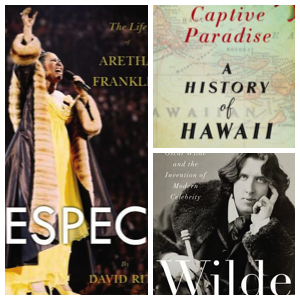 You may have guessed this already but I just miiiight have a tiny obsession with history: talking about it, reading about it… you know. And when it comes to books about historical events that focus on fascinating people and their roles in those events, I’m all over them.

You won’t be surprised, then, to see below a list of exciting upcoming releases in History and Biography through the end of this year. So you’ve got your tennis, your Broadway, your Bob Dylan, your circuses. What more could you possibly ask for?! Arthur Ashe shows how this iconic African American tennis player overcame racial and class barriers to reach the top of the tennis world in the 1960s and 1970s. Furthermore, it follows Ashe’s evolution as an activist during the shift from civil rights to Black Power. Interviews, memoirs, national and international publications: Hall draws on them all for this fascinating portrait of a great sportsman. Ok, so I used to just think: “Sassoon = British WWI poet.” And NOW I find out that he was so very very much more. First of all, dude was descended from a Sephardic Jewish family who emigrated to England from Iran and India. Also, despite several homosexual affairs, he ultimately married and had a son. Oh yeah, and he went from being a military hero to a confirmed pacifist, publicly criticizing the war and its wanton destruction of human life. Later in life, he converted to Catholicism. Ultimately, though, he is known for his powerful volumes of war poetry and memoirs. I’m so definitely going to check this out. The Greatest Shows on Earth: A History of the Circus by Linda Simon (Reaktion Books, 288 pages, September 15)

Here, Simon illuminates the history of the circus and the claim it has had on the imaginations of artists, writers, and people around the world, from the 18th century down to the present, and from Toulouse-Lautrec to P. T. Barnum. Luckily, we can have a front row seat to one of the most exquisite forms of entertainment ever conceived. And of course there are elephants and trapezes and dancing bears so…what’s not to love? Ok, copyright law may not be as exciting as dazzling circuses, but it’s an issue we’ve been dealing with for, you know, centuries. And it’s this history that can help us better understand the battles raging today regarding, for instance, digitization and open access. Basically, according to Baldwin, it comes down to the tension between creators and rights holders vs. cheap access to a shared culture. Economics, culture, politics, Anglo-American tensions: Baldwin serves ’em all up. Forget the Kardashians and Brangelina. Justin Bieber? Puhhhlease. If you’re looking for a celebrity, look no further than the grand-daddy of them all: Oscar Wilde. So it was 1882, America was bored bored bored and Wilde decided to give it a kick in the %^$& with a tour. He gave audiences educational lectures that felt like vaudeville and went from a not-very-well-known writer to a literary-theatrical superstar. Man knew how to work an audience, and we’re better for it. Here we have the second volume of Ian Bell’s monumental biography of a masterful musician and poet. Taking up where the first book left off, Bell takes us through the 1970s, ’80s, and ’90s, in which Dylan reinvented himself yet again, adapting to a new generation and cultural atmosphere and releasing new songs after seven years of silence. I can’t wait to start reading this. (Here‘s my piece about Volume 1). In this first definitive biography of the well-known and much-loved star, Zoglin argues that Bob Hope was the most important entertainer of the twentieth century. Did you know that Hope alone achieved top-rated success in every major mass-entertainment medium, from vaudeville to television and everything in between? So I assume Jimmy Fallon and David Letterman will be devoting entire weeks (in conjunction with this book release) to thanking Bob Hope for all he did for comedy and entertainment? But of course! Ever since grad school, when I researched turn-of-the-20th-century American culture and imperialism, I’ve been fascinated by the story of this former royal kingdom and most recent addition to the United States. Captive Paradise is the story of King Kamehameha I, who unified the islands; of Gilded Age tycoons who wrested it away for the U.S.; and of President McKinley, who presided over the eventual annexation of the islands. And while I recently listened to an audiobook of a different history of Hawaii, I’m interested in checking this one out, as well. From the acclaimed music writer David Ritz comes the definitive biography of the “Queen of Soul.” Despite a life of setbacks and tragedy, Franklin has maintained her place among the top talents in American cultural history, reminding us with “Respect” and her many other hits that a voice like hers should be cherished. A rich history of American theater, Blue-Collar Broadway tells the story of the people who created costumes, shoes, scenery, lights, and props. Moving from the 1880s to the 1990s, White explores the shifting centers of theatrical craft and their impact on the nation and the iconic New York City district of Times Square. With case studies of Oklahoma! (1943) and Evita (1979), as well as explorations of the role of theater in urban deindustrialization and in the revival of downtowns throughout the Sunbelt, Blue-Collar Broadway will satisfy your need for great theater history.