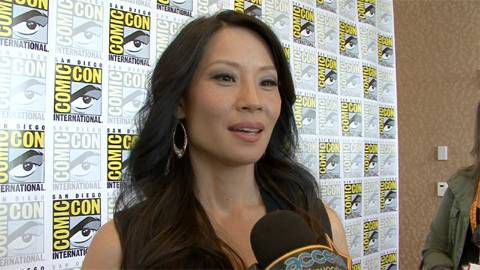 After watching (and re-watching) (and re-re-watching) BBC’s Sherlock, the mini-series that might as well be called “The Platonic Ideal of Television,” the bar for Sherlock Holmes adaptations is set pretty high. Like somewhere between the earth’s stratosphere and outer space high.

So of course American television network CBS was like “What up? Public domain property with a recently proven audience? Modern-day adaptation of Sherlock Holmes, meet our fall line-up.”

And then CBS was like “Well, noooooo, because in our adaptation, Sherlock Holmes is BRITISH but lives in AMERICA. DIFFERENT! Also, Watson is a GIRL. Also, Sherlock just got out of rehab, and Sherlock’s father (new-character-that-Arthur-Conan-Doyle-didn’t-include-in-the-original-stories-probably-for-a-reason-alert!) hired Watson to be Sherlock’s sober companion! Also… also… also… there’s a scene where Sherlock takes off his shirt and has a lot of tattoos on his arms and chest.

And that shut the BBC up. But it didn’t shut me up! You guys, I still have SO many more questions. Here are ten, because that’s a nice round number.

1.) Why does Sherlock have to be British if everyone else is American? Is it because you’re afraid that if you take away his accent he’ll be just like every other detective on CSI/NCIS/Law and Order/other crime shows I don’t watch? Or is it for an actually good reason?

2.) Unlike every other fan-person on the internet, I don’t HATE the idea of Watson being a girl. But I would like it better if Sherlock and Watson could both be ladies. Sherlock could be a girl’s name! It’s 2012. Basically everything can be a girl’s name. I really like the idea of Sherlock and Watson being dysfunctional American women crime solvers. Why didn’t you do that? Is it because you were afraid that would be such a good idea it would make people’s electronic-devices-they-watch-television-on explode? Or were you afraid not enough men would tune in to watch women be better than them?

You guys, I think I just got network programming.

4.) I know showrunner Rob Doherty has been telling everyone and their mother that Sherlock and Watson are not going to hook up. But Jonny Lee Miller is playing Sherlock and Lucy Liu is going to be Watson and I just have a really hard time believing that a man and woman could both be that sexy-looking and that banging at solving crimes together and that heterosexual and NOT be making out all the time at 221 B Baker Street.

You guys, I think I just got fan fiction.

6.) So I’ve read two of the Sherlock novellas, A Study in Scarlet and The Hound of the Baskervilles, and one of the collections of short stories, The Adventures of Sherlock Holmes. What I take away from all this is that Sherlock Holmes was the Original Detective Solving Quirky Mysteries. He battles basically mutant dogs, the KKK, the Red-Headed League, and Mormons, and that’s only in the stories I’ve read so far!

My question is: are you going to have Sherlock solve mysteries with all sorts of quirky set-pieces and mind-bogglingly cool villains? I’m not giving you an alternative to this, just do what I said on your show.

7.) In the stories, Sherlock is always playing Master of Disguise, he’s in costume so much he might as well just live at Comic Con. My question is, CBS Adaptation, are you going to put Sherlock in all sorts of fun costumes and make me laugh eight times over the course of each forty-two minute episode or are you going to play it cool and just make him strip his shirt off a lot and solve cases wearing nothing but pants and  his bare tattooed chest.

I’m fine with either scenario.

8.) In a recent interview, when asked if being Asian-American would factor into her portrayal of Watson, Lucy Liu was all joking-dismissive of Watson doing martial arts.

But… you know this would be the best thing ever, don’t you? Karate Watson? You KNOW this, right?

9.) What happened to the H in Jonny Lee Miller’s name? Is this a mystery Sherlock and Watson will have to solve?

10.) Are you guys super nervous about what the ghost of Arthur Conan Doyle will think of your show and are you going to do everything in your power to make Ghost Arthur proud? Or are you fine with being a phoned-in and mediocre procedural that makes everyone a lot of money and does little to nothing to explore and heighten the Sherlock Holmes mythology?

CBS Elementary, you know the right answer to this question and if you pick the wrong one this fall, me and Ghost Arthur Conan Doyle are going to be so sad and disappointed with you.