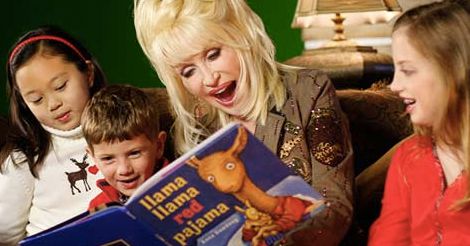 Quietly, steadily, and rather impressively over the last 20-plus years, Dolly Parton — yes, that Dolly Parton — has been making sure that the nightstands of babies, toddlers, and preschoolers all over the U.S. have a nice little stack of books to reach for at bedtime — or any time, really. At last count, the Dolly Parton Imagination Library mails books to more than 1.3 million children each month, which means this one little book program that is putting books in the hands of nearly 7% of the nation’s children under the age of five. “It’s a very exciting challenge” says Sam Roberts, Director of Operations for the Dollywood Foundation, which runs the Imagination Library. “There are a lot of moving parts.”

What else is there to know about the Imagination Library? Here are ten fun facts about the organization.

Dolly Parton is a national treasure.

“If the United States right now in this moment decided that it wanted to invest in educating every child to an equal degree, making sure everybody had actual equal opportunity, then we would become one of the most powerful countries on the planet,” Jemisin says. “We’d be able to reverse climate change. We would be able to do amazing things. Any country that genuinely harnesses its entire population and treats them all like people has nowhere to go but up.”
She pauses, and reality threatens to creep back in. “Maybe I’m pie-in-the-sky thinking.”

This GQ interview with N.K. Jemisin is fire!

One hundred years ago, when Madeleine L’Engle was born — on Nov. 29, 1918 — no one had heard of the particular rallying cry “she persisted.” L’Engle’s story, however, and that of her masterpiece, “A Wrinkle in Time,” is exactly about female perspicacity.

In the 1950s, L’Engle — a married mother of three in Connecticut — had published a few books, but she was turning 40 and well into a self-described decade of failure. She felt “spasms of guilt” for trying to write rather than behaving “like a good New England housewife and mother.” After yet another rejection notice from yet another publisher, L’Engle covered her typewriter, sure she was done.

If you need a reminder to keep going, keep pushing, keep persisting.