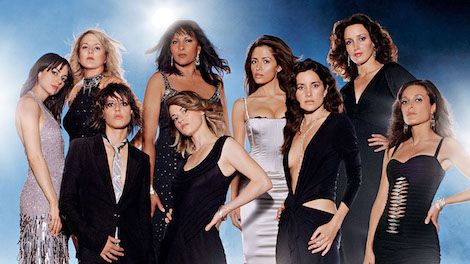 In case you’re not plugged in to lesbian Twitter, there’s (finally) new buzz about The L Word reboot. It’s been a hundred years since 2017 when we first started hearing serious teasers about The L Word coming back.

‘The L Word’ Sequel Series in Development at Showtime https://t.co/AejghMA6Oo via @variety

We grasped our phones in our hands and delighted in the crumbs creator Ilene Chaiken and stars Jennifer Beals (Bette), Katherine Moennig (Shane), and Leisha Hailey (Alice) threw to us.

It's on.
Think more rebel yell than reboot. 😉#TheLWord https://t.co/SJ3S5bpLc1

But finally we have an update! The sequel to the groundbreaking series about a group of lesbian women living and loving in Los Angeles is due by the end of the year. Showtime has ordered eight episodes to start, and we can only hope that might mean even more in the future.

The L Word was iconic, and bonkers, and broke a mold that made some lesbians feel seen for the first time. It was all we had—young lesbians in not-LA could actually see other lesbians living and interacting and falling in love. But there’s also a lot of really valid criticism on how the show handled race, socioeconomic issues (how the hell does Shane afford to live next door to Bette and Tina?), and transgender issues, among others. The show’s first iteration ended in 2009, before we saw the repeal of Don’t Ask, Don’t Tell; before marriage equality became the law of the land; and in our current political landscape, with our current administration in place, I have to wonder how Chaiken and her team of writers will address the aforementioned issues.

(Also, will Carmen and Shane get back together? Because they need to. The whole thing went to pot after Shane set fire to that. And actress Sarah Shahi has confirmed she will be in the sequel, so…)

I’m also reaching for the wisdom of Roxane Gay:  she wrote in her essay “Girls, Girls, Girls” in Bad Feminist about the extreme pressure we put on movies and TV shows to represent the full spectrum of experience.

“[A]ll we want is everything from each movie or television show or book that promises to offer a new voice, a relatable voice, an important voice. We want, and rightly so, to believe our lives deserve to be new, relatable, and important. We want to see more complex, nuanced depictions of what it really means to be whoever we are or were or hope to be. We just want so much. We just need so much.”

Point being:  I have a lot of complicated feelings here. Deep breath. Manage expectations.

But y’all, it’s not even spring yet, which means we have a lot to do:  rewatch the entire series, and (very optional) all of The Real L Word; worry over what Jenny’s role in this whole thing is going to be; try to figure out if Shane’s style game will have changed at all; re-mourn the loss of Dana. And I mean, this is Book Riot—we need to read a bunch of books before then.

I’ve composed a list of 10 books to help prepare you for the sequel. When it finally drops, we shall all run to our screens and ignore our responsibilities, knowing that we’ve done our reading, our prep work, and that the fashion can only have improved. (Right?)

10 Books To Get You Ready For The L Word Sequel

Eros The Bittersweet by Anne Carson

In the first season of The L Word, Jenny and Marina bond over Anne Carson’s book Eros the Bittersweet, which Jenny says was life-changing for her. I’m Team Jenny’s The Worst, but my low opinion of Jenny aside, I would be remiss if I didn’t list Carson’s work here.

Laura Deen Keeps Breaking Up With Me by Mariko Tamaki

The new graphic novel by Mariko Tamaki, author of This One Summer, will be out in May 2019. If you’re looking for a graphic novel that explores toxic lesbian relationships, friendship, and young love, this is going to be your jam.

Becoming Nicole: The Transformation of an American Family by Amy Ellis Nutt

Transgender issues have moved out of the fringe and more into the mainstream in recent years, and so I hope that the reboot of The L Word will use a careful hand in creating trans visibility. Thanks to books like this one, people are gaining awareness and understanding of what it’s like to be trans, and that makes it a great pick for gearing up for the show.

This manga memoir tells the story of one young woman’s exploration of her sexuality, her mental health, and her coming of age story. The artwork is beautiful and interesting, and the story captures one part of the scope of lesbian sexual experiences, a part that might feel lonely or isolated when compared to The L Word.

There’s an old trend in literature, to kill off that which is different or dangerous; transgender characters have had their fair share of this trend. That’s why Transcendent is a cool book: this collection features 15 stories of transformation, of transgender speculative fiction wherein no one dies or ceases being, but rather transforms, transcends, and lives.

I found out about this book from a list on Autostraddle, and I’m heading over to one-click it as soon as I’m done with this list. This butch-femme romance features Alexis, a college freshman who’s dealing with some mental health issues as well as her parents’ disappointments; Trisha is a slightly older transfer student and classmate of Alexis’s. But Alexis has also seen Trisha before:  she was a stripper at Alexis’s sister’s bachelorette party. This is a sweet romance about women who are attracted to each other but each have plenty of their own stuff going on.

The third installment in Cole’s Reluctant Royals series, and the first from an LGBT voice, Once Ghosted, Twice Shy is Likotsi’s story of her whirlwind almost-romance and the second chance romance that has us rooting for our heroines. And since polar opposites are super fun, we have buttoned-up assistant-to-the-prince Likotsi, and jewelry designer, maker, and badass family woman Fabiola. Just two women and their feelings hanging out for one day in New York. (And exciting—this book is now available in paperback.)

Lacey Chamberlain is an organized, well-planned accountant/financial advisor. But when a marketing firm moves into the office space next to hers, they push Lacey well beyond her limits:  loud music, stinky food, kickball in the hallway. But the one thing the firm has going for it is Alicia Wright, a free-spirited beauty determined to make Lacey like her. Opposites may attract, but to what end? And can these two women really make that work?

Would You Rather by Katie Heaney

Katie Heaney’s first book was published when she was 25 and chronicles her journey as a single woman waiting for the right guy. But her second book, Would You Rather, takes a surprising turn. This collection of essays tells Heaney’s story of realizing she was gay, meeting the right girl, and navigating life as a freshly out lesbian. And what’s the first chapter about? The L Word.

Katie Daniels, down-home Kentucky native, has just been dumped by her fiancé when she finds herself in an office with self-assured New Yorker Cassidy Price, kicking ass, taking names, and wearing a men’s suit. Another opposites attract romance, this book is also notable for its subplot, the sale and closure of Cassidy’s beloved gay bar, the one that was home for her as a young lesbian in New York.

For more queer books, check out 15 Trans, Non-Binary, and Non-Conforming Writers to Support; The Best Queer Books of 2018; and 2019 YA Books Starring Queer Girls