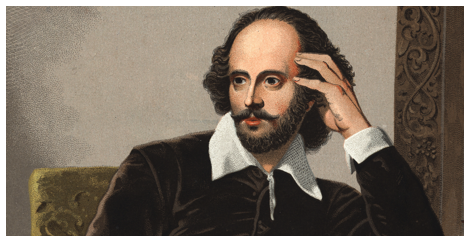 400 years later and Shakespeare just hasn’t gotten old. Good old Will has earned his place in the literary canon for good reason. I mean, the guy invented 1700 words, remaking our language. He is responsible for the most cunning, hilarious insults.

But it wasn’t just his clever way with words that made him and enduring literary figure. These stories—of love and betrayal, of revenge and jealousy, of ambition and folly—speak to the human condition.

So it’s no surprise that the basic plots and the character archetypes of Shakespeare have been remixed by modern writers.

There’s no shortage of Shakepeare-inspired fiction. Every reader should find something to pique their interest among these 13 adaptations and homages to the Bard.

The Gap of Time by Jeanette Winterson

Compelling? Lyrical? Are you still surprised this is inspired by Shakespeare?

Winterson transplants The Winter’s Tale to London just after the financial crisis and a storm-ravaged American South with flawed characters entangled in jealousy, obsession, even self-delusion. And don’t be surprised when no one escapes unscathed.

Smiley’s taut prose and grasp of human nature brings the story of King Lear to a Iowa farm. This bleak, moody novel reveals keen insight into people’s motivations and deftly explores sibling rivalry and the tensions of marriage.

Not all Shakespeare is doom and gloom, though, and neither is this list. Tyler modernizes The Taming of the Shrew as the story of a research doctor on the verge of a medical breakthrough who schemes to have his daughter marry his lab assistant, whose visa is about to expire. An engaging novel with sharp humor.

This one’s for the dog lovers. Atmospheric and haunting, this is a story of a young, speech-disabled boy trying to prove his uncle murdered his father.

If you really loved Hamlet for the ghosts, you’ll love this modern take on it from British author Matt Haig, who’s always delightfully clever.  At his father’s funeral, 11-year-old Philip realizes he’s just been admitted into the Dead Father’s Club, whose members are exclusively the children of those who were murdered, and that only murdered people end up as ghosts. So now he’s on a mission to avenge his father. With such an endearing narrator, this is captivating read.

A Wounded Name by Dot Hutchinson

This novel is a reimagining of the world and story of Hamlet from Ophelia’s perspective and set in an American boarding school. Feminist, dark, brooding, with evocative language, don’t think that just because this is YA it will have a happy ending.

Exit Pursued by a Bear by E.K. Johnston

Don’t worry genre readers, there’s Shakespeare inspired books for you, too. This cheeky and ribald romp retells King Lear from the perspective of the fool. Be prepared to laugh until it hurts.

This inventive and imaginative steampunk retelling of the Tempest is written in an epistolary style. Zeppelins, unicorns, mechanical men… it’s all here, but so is a strangely compelling voice and a wacky plot that will keep readers turning pages. Perfect for fans of offbeat fiction with quirky characters.

You know what improves Romeo and Juliet? The zombie apocalypse.

Requiem of the Rose King by Aya Kanno

This dark fantasy manga series is loosely based on Richard III.

This ambitious graphic novel throws the characters of Shakespeare’s plays into a shared world and mixes them up in unexpected ways, to delightful effect. Fans of Fables and The League of Extraordinary Gentleman won’t want to miss this bloody good time.

This hip-hop retelling of Romeo and Juliet focuses on the most intriguing character, Tybalt, and transports him from Verona to Brooklyn. Think Hamilton the Musical meets Daniel Jose Older’s Shadowshaper but in iambic pentameter with gorgeous illustrations.

What Shakespeare-inspired works would you add?